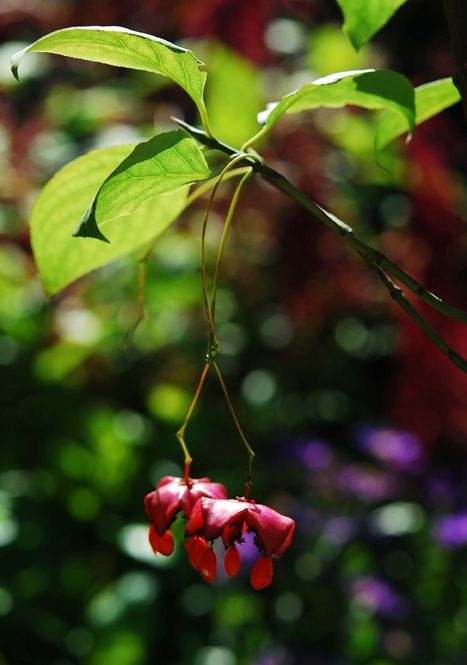 Mention the genus Euonymus and immediately people respond with ugh! Burning Bush! It’s invasive! It’s banned from commerce! All valid responses if you’re talking about Euonymus alatus, but we want to cue you in on a different, lovely and until now, uncelebrated Euonymus, commonly known as Asian Spindle Tree.

We first discovered this plant on a September morning two decades ago, when the Arnold Arboretum held their annual plant sale at the Case Estates in nearby Weston MA.  Along the path to the barn there was a planting of Euonymus sachalinensis (a.k.a. Euonymus planipes) espaliered along a fence, where the horizontal branches were dripping with the showiest seed pods. The pinkish red seed capsules had burst, displaying dangling red orange fruit. There were no specimens for sale, but we found a source for seed a few years later, and after incubating for 2-3 years in a seed pan, signs of life finally occurred.

This is what you need to know. Asian Spindle tree is native to Sakhalin Island off the northern coast of Japan. It is slow growing as a youngster, but eventually forms a small tree to 15′ with a wide crown. It can be pruned to great effect, as the espaliered version which we so admired at the Case Estates proved. It does flower, or how else would there be fruit, but the blossoms are not the real show. Fall is the season to celebrate Asian Spindle. Colorful September fruit, crimson pink fall foliage. It is amazingly adaptable to soil types, except perhaps very wet ones, and grows best in full sun or part shade. Most often it is listed as hardy through zone 6, but we’ve heard reports from growers who have had success with it in zone 5. Find a spot in your fall garden for this gem.