“To the illuminated man or woman, a clod of dirt, a stone and gold are the same”….Bhagavad Gita 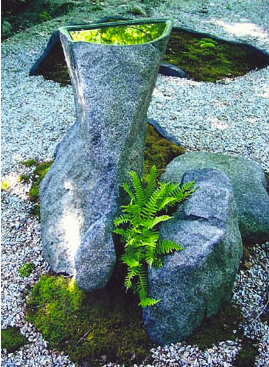 A man reaches for the end of a strap hidden within a pile of stone. From a void his hand appears with the strap.  Now cradled in the strap is a mass of stone. This stone, the fertile ground to where our sculptor, Ron Rudnicki, brings his tools, is now just a great mass. All acquaintances left behind, soon it will be freshly minted and asked to play in ensemble. For now, all is in flux, all possibility: Ron and the stone standing still between reflection and rotation.  The only certainty is that a new relationship will develop. Now a piece, formed from Ron’s reflections and memories, will inform his admirers, his clients and their communities. Perhaps some of Ron’s reflections will become theirs, but the overwhelming presence of the piece will remain, bridging generations, creating new communities. Prescience from a pile of stone. 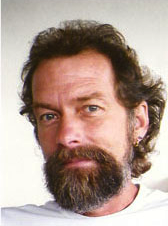 Ron’s sculpture gardens invite interaction. He places stone, found and composed, or tooled and contrived, into the landscape. Often it is both. He builds sculpted garden environments with stone that create a sense of permanence, perhaps because his work sometimes appears to have been uncovered rather than constructed. These gardens, united with their sites, honor existing and future stewards where stone is not seen as a static, unchanging mass. Stone is an active participant in the garden construct and will continue to find new expression through the eyes of the viewer.  Stewards of these gardens may enjoy these spaces framed through their windows, observing the changing light through the course of the day and the seasons. Others will find repose within these spaces.  No single right or wrong connection can be brought to these living, breathing, rhythmic spaces, dynamic in themselves but which allow those of us with stronger biological rhythms to draw out new meanings as we continue to engage them. 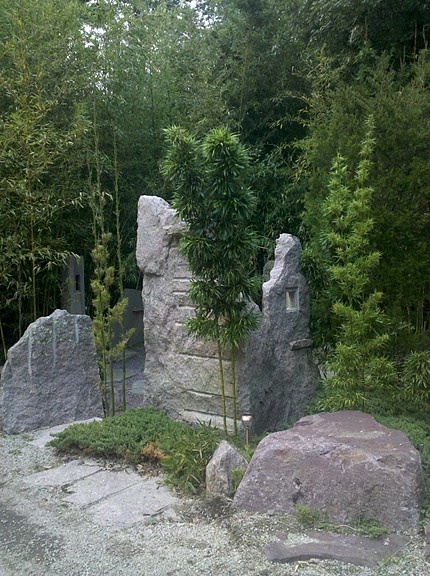 You shouldn’t be left thinking that no plant can grow where stone is so dominant. Though Ron confesses nomenclature isn’t his strong suit, he instinctively integrates  strong architectural plants, whether they be bamboo, hellebore or forest grass, into his stone environments.The individual who becomes the caretaker of his sculpture gardens may want to play with companion plantings. Ferns, grasses and the occasional burst of color are welcome suitors in spring and summer.

Ron’s work is part of the permanent collections at the DeCordova Museum and Sculpture Park in Lincoln, MA and Jack Lenor Larsen’s Longhouse Reserve in East Hampton, NY, as well as in the gardens of private collectors.