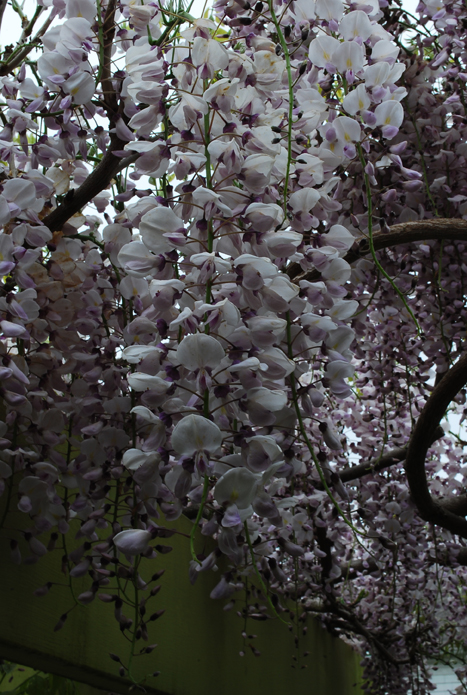 It’s the third week in May, and the Wisteria floribunda ‘Blue Eyes’ which covers our pergola has begun to drip with fragrant blossoms. It’s certainly a sight, and elicits ooh’s and ahh’s from nursery visitors. Conversation immediately turns to pruning advice, and the question we hear over and over again, “Why hasn’t my Wisteria ever bloomed?”

We’ll cover extensive pruning Wisteria advice in a later blog posting, but let me address the flowering question. Wisteria often take several years to bloom after transplanting as it  is concentrating energy on establishing a firm root system, but there are other points to consider. First, plants should receive a good 6 hours or more of sunlight. Also, do not fertilize with a high nitrogen fertilizer. Wisteria are in the legume family, and fix their own nitrogen from soil. Select a fertilizer with a high phosphorus # (the middle number) such as 5-10-10, 5-10-5, or  Espoma’s FlowerTone which is a 3-4-5.

It is advisable to select named clones which have been propagated from productive flowering stock. Wisteria grown from seed are quite variable in their blossom production, and some have been known to never produce a bud. Another thing to consider is that Wisteria sets buds on old wood, and should be pruned  in late spring after flowering (or when it should have flowered) to about 6″ from main branches. One other trick is root pruning in early spring. Using a sharp a spade, dig in about a 2′ radius from the base of the vine. This will sever the roots and may shock the plants into flowering.