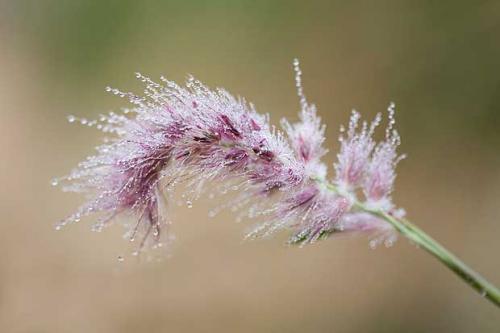 There are many forms of Fountain Grass out there, including some lovely selections that are only hardy in warm climates, such as P. setaceum and advena cultivars. One that we’ve been charmed by is this selection of Oriental Fountain Grass, Pennisetum orientale ‘Karley Rose’ . ‘Karley Rose’ begins sending forth it’s soft fuzzy plumes in June and carries on through October… that’s 5 months. ‘Karley Rose’, pretty enough for pots, is splendid planted in drifts, where it will dazzle and dance in the late day light.

‘Karley Rose’ forms clumps of slender green foliage which are about 2′ tall and wide.  3-4′ stalks bear smoky mauve pink plumes very early in the season. Horticultural literature states it is hardy in zones 6-9, but a number of our customers reported no losses in zone 5.  Give her a spot in full  sun, (sheprobably can take a little shade) and a soil that has good drainage. Pennisetum orientale ‘Karley Rose’ is a star candidate for xeriscaping, and would be great partnere dwith Euphorbia Helena’s Blush’, Sedum ‘Maestro’  and Calamintha nepetoides.