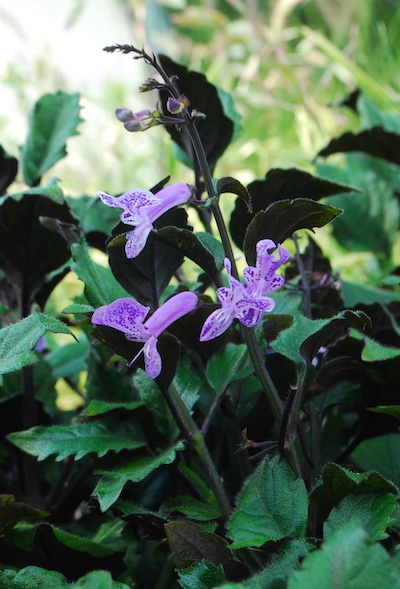 Plectranthus is a large genus from South Africa, related to Coleus. This selection, ‘Mona Lavender’, was bred at Kirstenbosch Botanical Garden in Cape Town, S Africa in the 1990’s and was introduced into the US market by Ball Horticultural. Plectranthus ‘Mona Lavender’ is a stunning plant bearing dark green foliage with eggplant purple undersides. She teases you with an occasional bloom in summer months, but we have found here in southern New England that it is not until  late August when the real display begins. Multitudes of lavender throated flowers are held in upright spires providing a show that continues right until frost.

Grow Plectranthus ‘Mona Lavender’ in rich soil in sun or partial shade. Plants branch quickly when pinched, and this encourages a compact form. ‘Mona Lavender’ generally reach 18-24″ for us, but may get 2-3′ in a climate with a longer growing season. (Customers in Florida wholeheartedly give this plant a thumb’s up). We love using her in containers where her dark foliage adds contrast, and surprise from the late flush of blossoms. Alas she is only hardy to 35 degrees, so when frost is predicted, you may want to bring ‘Mona Lavender’ indoors. She might be very happy spending the winer on your sunny window sill.