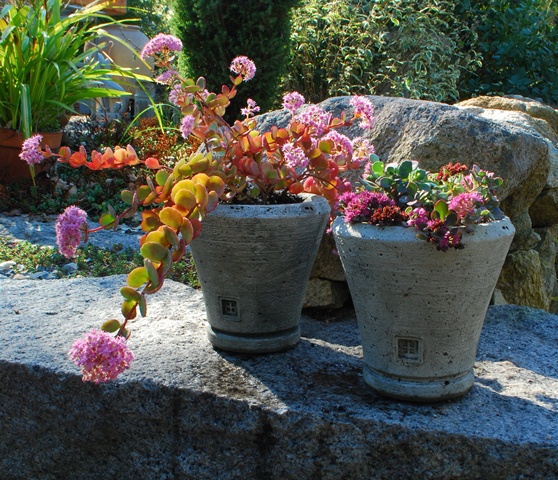 Sedum sieboldii on the left, next to Sedum cauticola

Hmm….October Daphne. Well, it’s a bit of a stretch to say this delightful sedum is reminiscent of a Daphne, but  if I use my imagination I might convince myself. Perhaps there is a bit of a resemblance to one of the low creeping forms. Regardless of whether the common name is misleading, little Sedum sieboldii adds a dose of autumn color to the late season garden, with clusters of rosy pink flowers at  the tips of arching stems, clothed with pink and apricot tinted blue green scalloped foliage.

Botanical nomenclature now wants to classify this form of Stonecrop as Hylotelephium, but for the sake of common knowledge let’s continue here using the genus Sedum. Sedum sieboldii begins the spring season as a tidy rosette of almost turquoise fleshy scalloped leaves that develop a lovely wine red edge. The form and foliage work well all season and then informally transform in early fall, when the stems begin to extend, flower and develop October color. It is super hardy (we’re talking zone 3 here). It is most often used as a rockery subject, tucked into crevices where it remains quite happy, but we’ve left it outdoors in frost tolerant pots and it returns in the spring unfazed. Obviously Sedum sieboldii  likes well drained soil, but we’ve found it to be quite forgiving of average soil conditions.