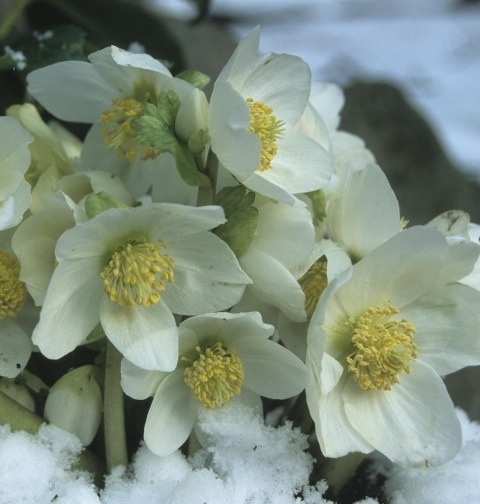 You may be curious about Helleborus niger. It is the botanical name for the legendary Christmas Rose, but its Latin name translates to “Black Hellebore”.  A little confusing to us in modern times, since we see white flowers. During the Middle Ages it was commonly called Black Hellebore (a name also applied to other European Helleborus species) to distinguish it from White Hellebore (Veratrum), both of which had medicinal, if not toxic, properties.

The other common name comes from Christian mythology. The story goes that a young girl’s tears falling onto new fallen snow caused a group of Hellebores to burst into bloom, providing her with a gift for the newborn Christ Child, and thus, H. niger became known as the Christmas Rose.  The trouble with this story is that the old varieties of Hellebrous niger rarely bloom sooner than mid January, and that is only in mild winter areas, so perhaps this was a belated gift.

Now, thanks to the busy German breeder Hueger, a new cultivar has been introduced which blooms as early as Thanksgiving, with a good display of 2-3″ pristine white single rose flowers in full display by mid December. This compact new cultivar, growing to  roughly 12? x 12?,  is being marketed under the name Helleborus ‘HGC Jacob’. (HGC stands for Helleborus Gold Collection, and but I think they should ditch the monogram for marketing reasons). It is hardy in zones 5-9.

Culturally this evergreen perennial prefers a well drained rich soil that is slightly alkaline. Site ‘HGC Jacob’in a protected area, so that winter winds do not desiccate the foliage and flowers, in partial shade. As an insurance measure, apply a mulch of fallen leaves around this little Hellebore, and on mild days, pay him a visit as he peaks through his protective layer. He will put a smile on your face.