It seems a little late to talk about winter containers but we’ve had such a mild end to autumn here in the northeast, we’ve only just begun to “replant” for the winter season. And you may note that I used “replant” in quotations.  This is because, after years of experimenting, we think many cold climate gardeners are really better off using cut evergreens and twigs over living plants for winter containers.

From a frugal viewpoint, using living plants seems like a wise investment at first. Indeed, a planted Boxwood, Juniper or Holly will carry on well through December and the first part of January in most winters. It’s mid winter conditions that are the problem. We often lack the benefit of consistent snow cover to blanket roots. Dessicating arctic winds are really cruel to evergreens whether planted in or above ground. Water cannot be taken up when the soil is frozen.

If you do have your heart set on using live plants, or you have protected spots or live in milder zones, consider using Dwarf Hinoki Cypress (Chamaecyparis obtusa cultivars) or other hardy conifers such as Dwarf Spruce (Picea) and Arborvitae (Thuja), which tend to be hardy through zones 5, and even 4  or 3. We have had great luck with Dwarf Conifers in troughs, and stress we’re successful because we make sure the soil is sharply drained and have protection from wind. It also doesn’t hurt to use an anti-dessicant.

As far as colorful twigs and branches, thoughts go immediately to the Red and Yellow Twigged Dogwoods (Cornus stolonifera and sanguinea cvs.). These will winter over in pots, but cut material works as well if not better, since one large plant of Twigged Dogwood with many branches would need a rather large container to accomodate its root ball and would be an otherwise underwhelming subject the rest of the year. 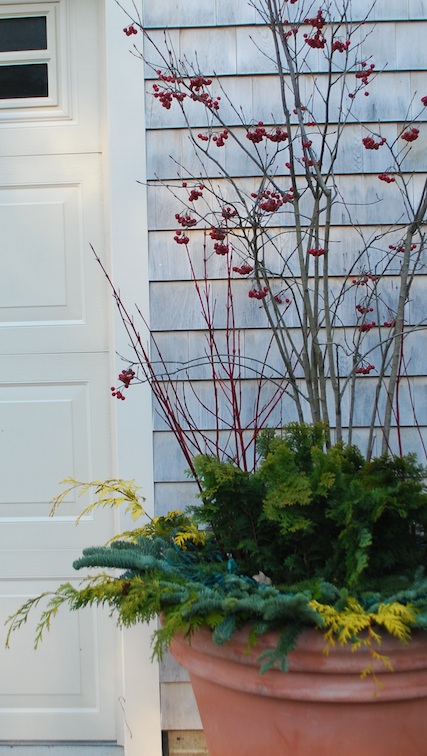 There are other options. Consider  planting deciduous plants that are hardy to a zone or two colder than the one you garden in. Since they are deciduous, they do not have to hydrate foliage in winter. This autumn we replanted a large pot using a native plant, Chokeberry a.ka. Aronia arbutifolia ‘Brilliantissima’  for height, fall color and fruit, underplanted with Plectranthus ciliatus and Ivy. For December’s display, we replaced the tender Plectranthus with cut greens and red twig Dogwood, while the Aronia’s dangling red fruit clusters continue to be showy. Our hope is that in early spring the Aronia will bear clusters of white flowers, providing a third season of interest. Since Aronia is hardy to zone 4, (we’re in 6) we expect theres a good chance for that!  (PS..3 years later the Aronia has not only thrived but has needed root pruning and trimming back!)

Other options for deciduous shrubs or small trees that might make good winter container subjects include Witchhazel (Hamamelis) which would provide blossoms in late February, then autumn foliage. Dwarf Columnar Hornbeam, Carpinus betulus Columnaris Nana’   makes a well behaved compact columnar subject that seems to tolerate growing in containers well. It’s too bad that one of our former favorites, Rhamnus frangula ‘Fine Line’ was added to the banned in Massachusetts plant list. It is hardy into zone 3, has great form, texture and size, and for the record, (attention conservationists) we’ve had it on our property for 8 years, and have yet to come across a single seedling.

Have you experimented with multi-season interest plants in your containers? Which ones have worked out well?