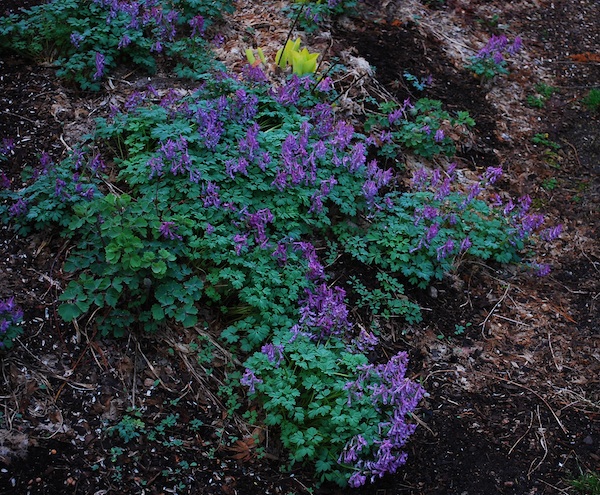 If you don’t already grow this little spring ephemeral, you absolutely should! It is easy, undemanding and disappears into summer dormancy quite quickly. It’s super hardy in zones 3-9.

Corydalis solida, commonly called Fumewort, appears and begins to bloom in early spring, with 6-9″ stems bearing numerous tubular typically lavender flowers. The soft gray green lacy foliage compliments the flowers nicely. C. solida grows well in sun or partial shade in well drained soil and multiplies quite quickly form bulb offsets and self sowing. It is easy enough to lift and move the small bulbs which lie just below the soil surface, should the progeny come up where you don?t need them. And, I repeat, the foliage fades and dies back before you know it, so that the succession of plants that follow soon after are not being affected.

There are several choice cultivars of C. solida available from reputable bulb merchants. We have C. solida ‘George Baker’, a pinky red form in one of our beds, but he has not reproduced much at all.