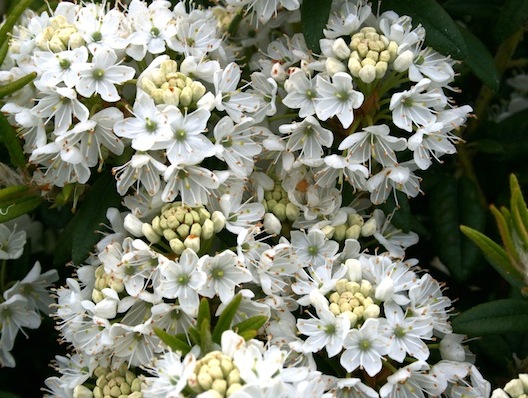 We thought you might enjoy the subtle charm of this hardy little known Rhododendron (perhaps nomenclature is its problem) . Commonly called Labrador Tea, formerly classified in the genus Ledum, and then later named R. tomentosum, there’s been obvious confusion when gardeners are seeking information. ‘Milky Way’ is a superior clone selected by Steve Hootman. In mid April, it produces trusses of small white starry flowers, which allude to its cultivar name. Fine textured evergreen foliage is small narrow and olive green.

Rhododendron diversipilosum ‘Milky Way’ is quite cold hardy, growing well in zones 3-6. It can take poor soil conditions but will be happiest if given a well drained soil with humus and regular moisture in sun or partial shade. Plants grow to 3′ in height and up to 5′ in width. It would be a great addition to a rock garden planted with early spring Narcissus, Hellebores and Veronica ‘Georgia Blue’.