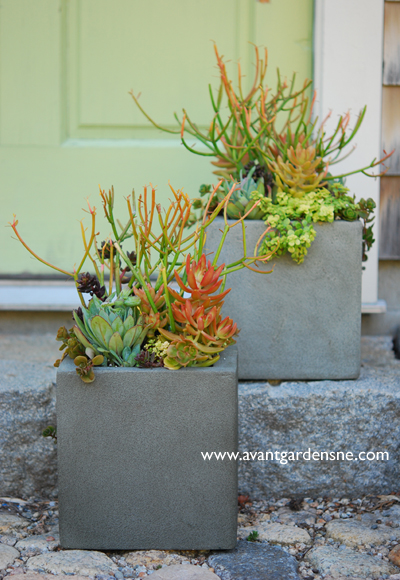 After the lazy days of August, September can seem like the busiest month of the year. So many neglected chores, both inside and out, await attention. For a lot of us, the summer containers gracing our entryways need a makeover. You can buy a pot of mums or……

You can plant succulents.

Followers of this blog must know by now that I am a big succulent fan, and even after a wet and extremely humid spell, I can still say the succulents planters we did up earlier not only still look sweet, they are going to get better as the night temperatures become chilly. Cool night temperature bring out deep and rosy tones in the blue, olive and bronze foliage colors of the many non hardy succulents.  Many tender forms such as Echeveria ‘Black Prince‘ and Senecio ‘Blazing Glory’, begin to bloom as do many hardy species of Sedum such as S cauticola  ‘Lidakense’ , ‘Turkish Delight’ and‘Dazzleberry’.

Succulents are mix and match plants. Of course, they all like the same sandy, well drained soil mix, and the colors all work well together. I’d like to add that the most interesting combinations include plants which have light, medium and dark tones. In this pair of planters, I’ve used Euphorbia tirucalli var rosea, commonly called ‘Sticks on Fire’ (guess how it got its common name) for height, the blue gray rosettes of Senecio ‘Blazing Glory’,  a coppery orange tinted Sedum nussbaumeranum, the soft yellow Sedum makinoi ‘Ogon’ and an olive tinted Sedum tetractinum to spill over the sides. Tucked in for added dark tones is Sedeveria ‘Jetbeads’.

1.When you group succulents together you can pack them in quite close together. They do not need a lot of nourishment nor water, and they don’t grow very fast.

2.The selections that are not hardy in your area will need protection when temperatures dip below freezing, and here we sometimes get a really cold night in late October, followed by a spell of Indian summer.  Either move the pot inside if a frost is in the forecast, or cover with a large tarp or blanket.

3. Once it becomes apparent that temperatures will be below freezing at night on a regular basis, bring your container into a frost free area that gets bright sunlight. If your container is too big to bring indoors, dig out the specimen plants you would like to keep and pot them up in a sandy quick draining soil mix. I plan to do a blog post about what to do about wintering over succulents in a month or so.