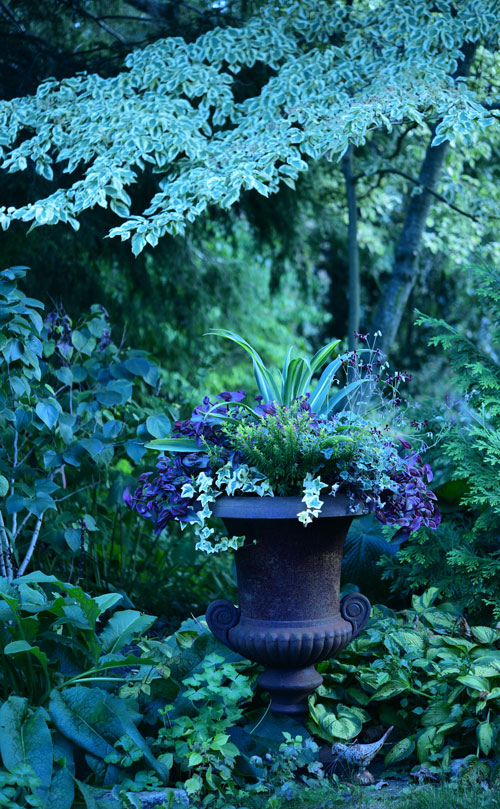 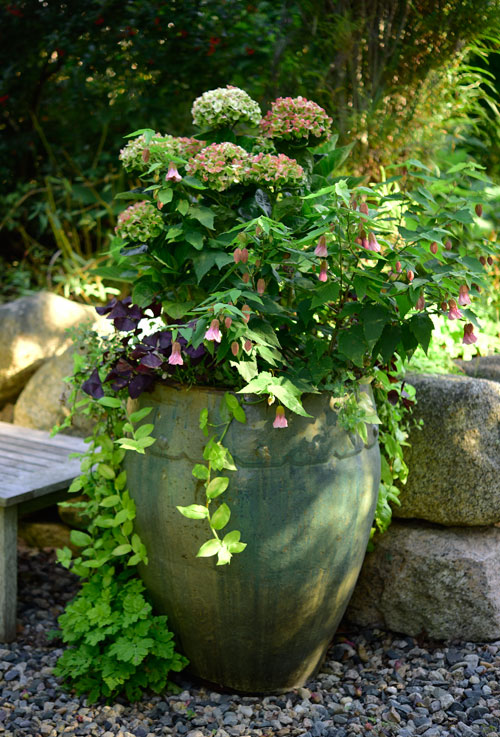 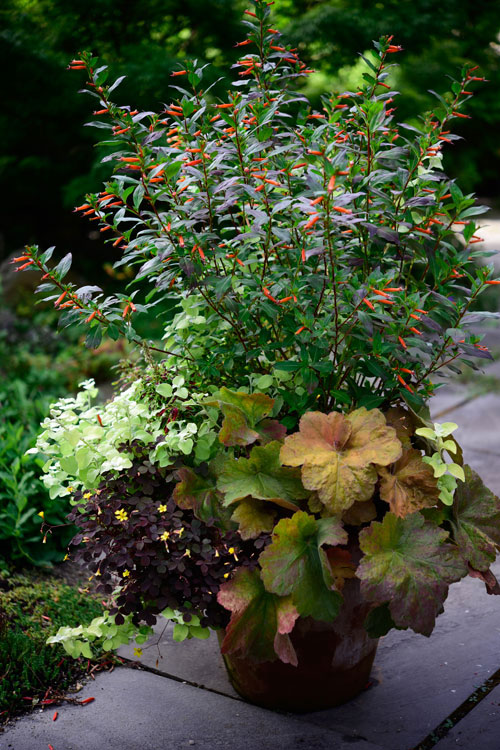 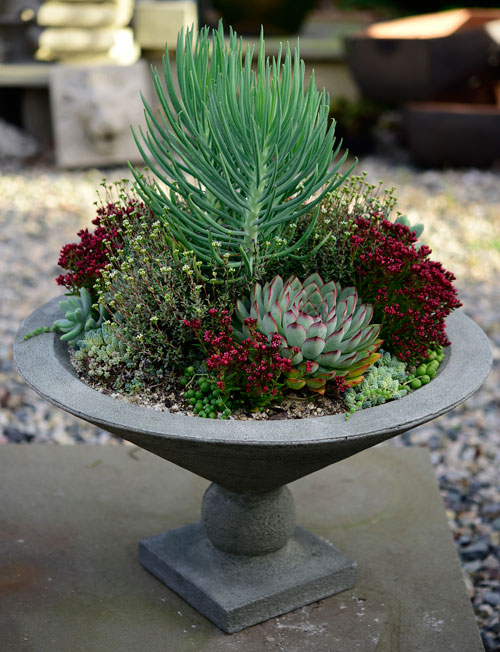 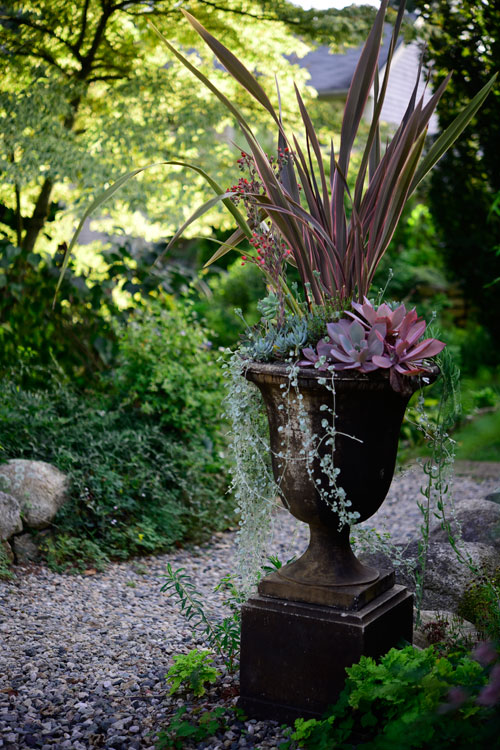 When planning container combos to display throughout our gardens and nursery, I want each planter to showcase unusual selections and color combos, have a beautiful rhythm, be easy to care for and still look terrific at the end of the season! Of course with our unpredictable summer weather (some years too wet, others too dry) some combinations hold up better than  others. Above are my five favorite ensembles, and below are the dozen pots shown in the early summer “Before Shots” blog post , ( the end of September shot is right beside it). 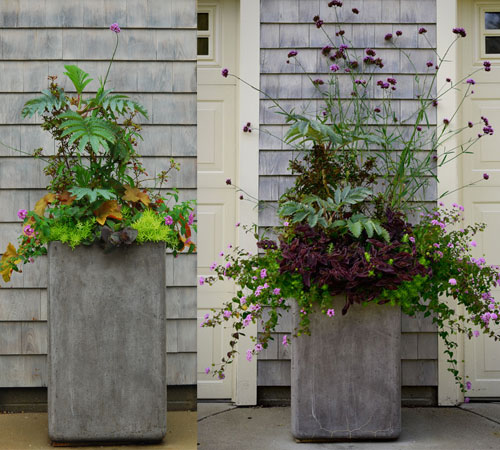 Tall Cylinder Pot…The Verbena bonariensis, Tradescantia and Lantana exploded! The Melianthus held its own, but the Lemon Coral Sedum lost its battle with the Pale Puma Tradescantia, and the Heuchera ‘Southern Comfort’ has wimped out. Note that the Lantana montevidensis has never needed deadheading and shows no signs of stopping flower production. 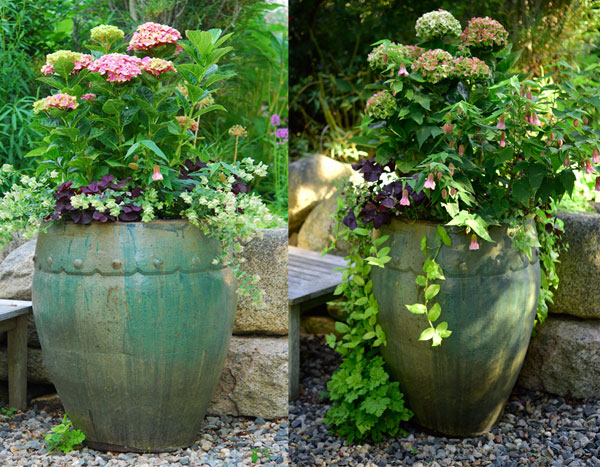 The California Hydrangea Pot has aged gracefully. While the Ornamental Oregano ‘Kent Beauty’ had a great showing all through July into August, it finally allowed the ‘Gold Wings’ Tradescantia to take over spilling, while the slower growing Abutilon ‘Pink Charm’ is now dazzling into fall. 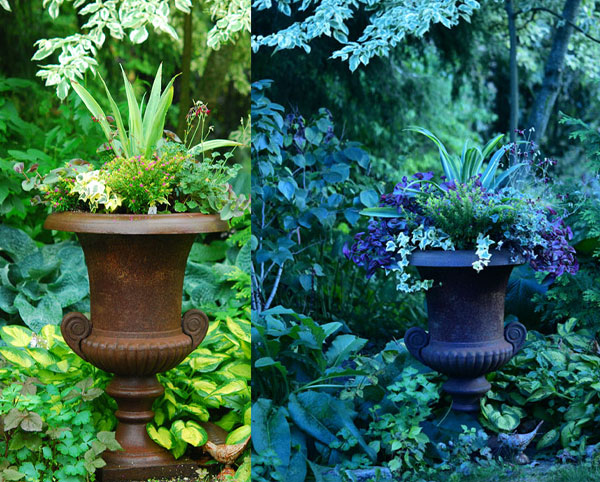 The Cast Iron Urns have retained a subtle beauty all season. (The purple cast to the September shot demonstrates how the end of day light is changing. ) A super easy combo that required only an occasional cutting back of the Pelargonium sidoides flowering stems, the plant selections of Beschorneria, Cuphea hyssopifolia aurea  Tradescantia Pale Puma’ and variegated Ivy held its scale well for the past 3 months. 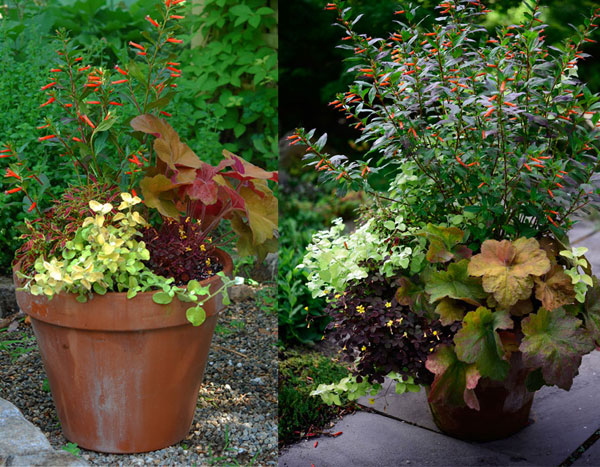 Hummer’s Pot. Perhaps the least impressive pot at the beginning of the season but with real staying power as the plants aged beautifully. The Cuphea ‘David Verity’ has only asked to be watered regularly, and has never needed deadheading, the Helichrysum ‘Limelight’ did need a cut back once this summer, and the Oxalis ‘Zinfandel’ continues to shine with its dark foliage and tiny yellow flowers. Heuchera ‘Southern Comfort’ is working well here. Hummingbirds loved visiting, and this is still an impressive planting for autumn. 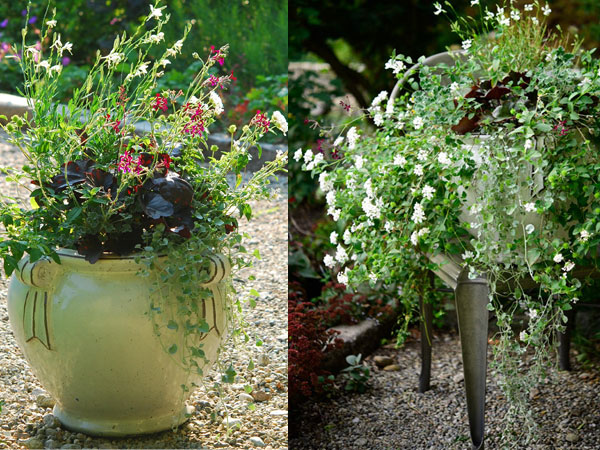 The white form of Lantana montevidensis began to overwhelm the other plants in the White Bean Pot , even after being cut back several times….Oh well, too much of a good thing has its drawbacks. 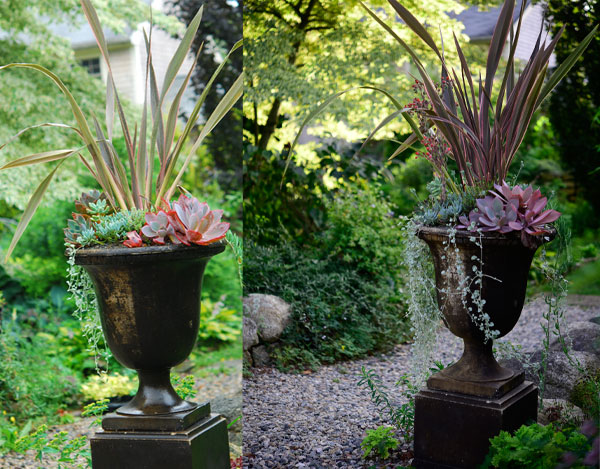 Charcoal Urn... I wasn’t surprised that this combination of Phormium and Succulents would be easy care and would age well. It needed only occasional watering, and cutting back the Silver Falls Dichondra when it dripped onto the pathway. 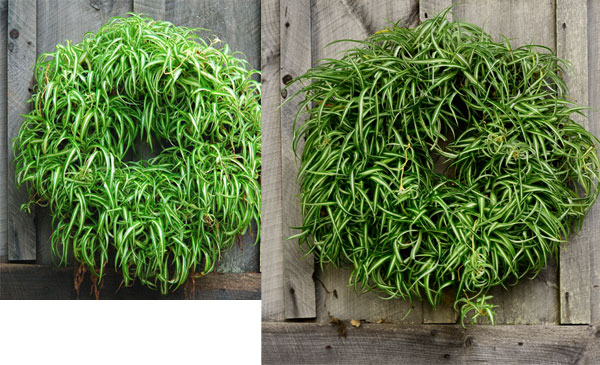 Can you notice any difference in the Living Wreath of Mini Spider Plants (left–June, right–late September)? This is the perfect vertical garden for a shady door, needing only twice a week watering, even during the hot dry summer we just experienced. 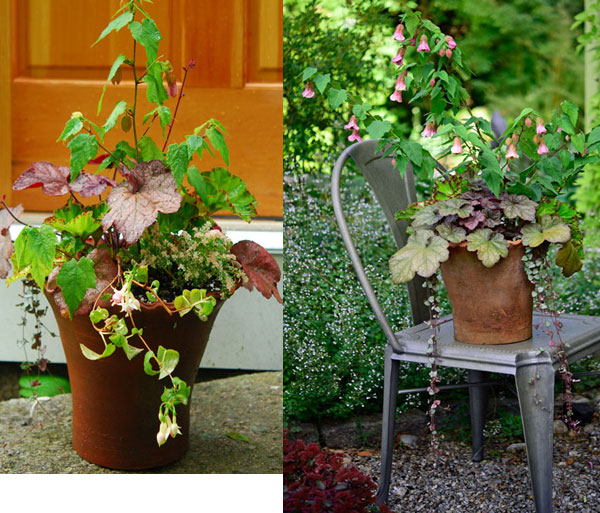 This ensemble spoke quietly at first but became more memorable as the summer continued. The Abutilon ‘Pink Charm’ became more floriferous, the Heuchera ‘Beaujolais’ is taking on fall appropriate tawny tones, and I just adore the little Rosary Vine, Ceropegia woodii, dangling over the sides, with its peculiar pink and charcoal gray flowers. 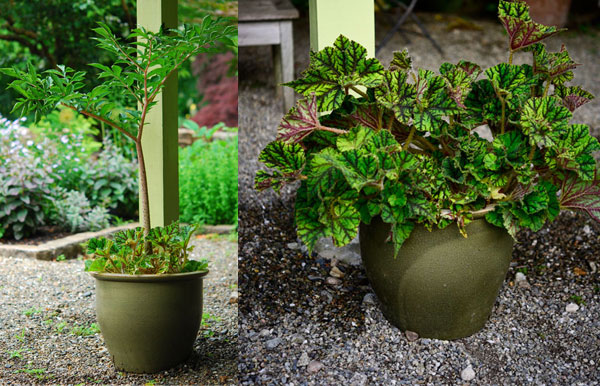 This shady pot grouping was an experimental mix of similarly colored foliage…the tall Amorophophallis konjac(Voodoo Lily) never put out a spathe, but looked okay until early September when it very quickly began to go dormant. I was left with a nice full pot of Begonia ‘Wild Pony’ and little B. bowerae. 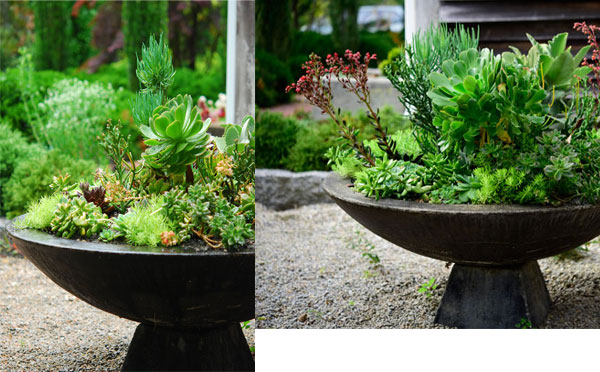 The Zen Bowl of succulents hardly needed any care so we didn’t pay attention until it became overwhelmed with Sedum ‘Lemon Coral’ in early August, which completely smothered  its shorter neighbors. A harsh cut back helped, but it was a little too late for the buried plants to put on much growth.  We’ve had such a warm September that the succulents have yet to take on their fall tones…will try to get another image now that we are starting to get cooler nights. 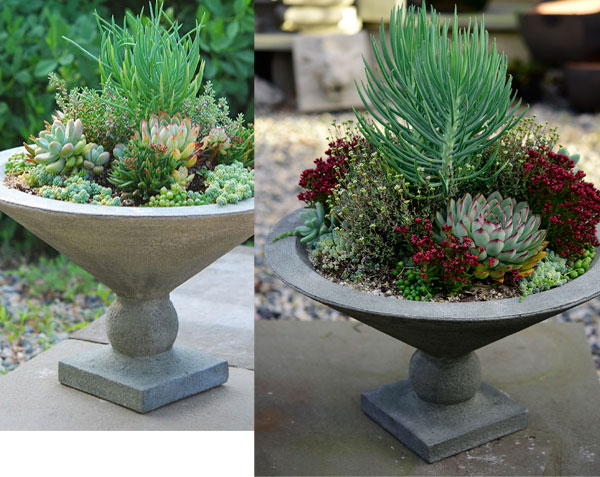 The Succulent Martini Pot was the hit of the summer…we sold this combination of plants over and over again. Notice how the rosy red flowers of little Crassula schmidtii add that perfect zing. 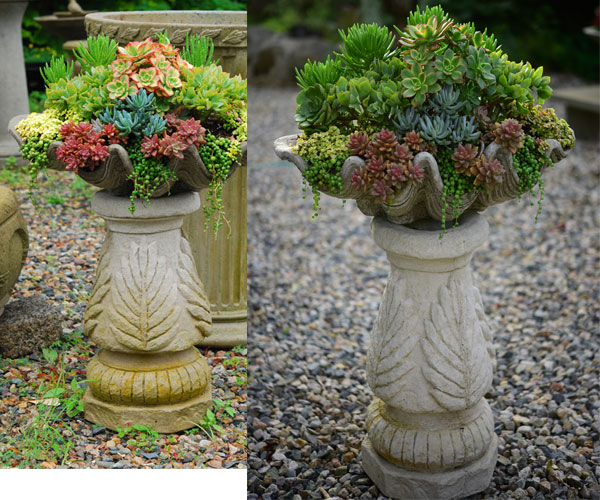 Our classic Seashell Pot with Succulents has aged beautifully,wouldn’t you agree? The September image shows how different the end of the day light is three months later.

Which combination ideas might you borrow for your containers next year?