A Gift: The Little Fir Tree 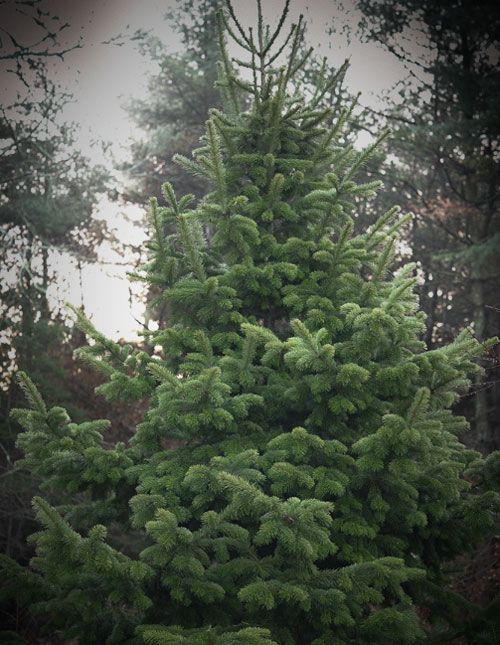 Sometimes certain people touch our lives and leave us with a message that continues to reveal. Last week, while wandering about the garden in search of wreath making greens, I caught a glimpse of a little fir tree that was a gift. This little fir is not a “show off” plant, but its presence speaks of goodness and hopefulness, qualities which most gardeners share.

The little fir tree had been a gift from a soft spoken older gentleman, Phil Sheridan, who frequented our nursery in the early years. On one visit, Phil had just come back from a Conifer Society meeting (perhaps 1998?) and presented me with a small 8” seedling of Abies siberica. The only info I could recall him sharing was that it was quite rare. Phil, who was charmingly eccentric and in his eighties at the time, then went off to peruse the nursery and selected several perennials and a young Stewartia, no more than 18” tall. “I’ve always wanted a Stewartia,” he said, and I remember thinking  then what a remarkable optimist he was.

Back to the rare little fir tree. It was tiny and grew slowly, so it lived in a pot for a number of years until it was big enough to be planted in open ground. I had no idea of its eventual size. I checked out the woody plant bible by Mike Dirr…no reference at all to A. siberica. The internet was still immature, and there was no listing in any of the search engines. When knowledgable plant people would visit the nursery I would quiz them if they knew anything about this particular species, but only received puzzled responses. Perhaps it had been mislabeled. I knew most firs preferred cool summer climates, and more often than not, our summers were warm. I finally planted the little guy anyway at the end of a mixed border, and watched him grow.

Today, the little fir tree is almost 10’ tall. It has a lovely pyramidal form and soft fragrant needles. I went back online to see if there was now more information on this elusive species, and if it was truly Abies siberica. Yes and maybe! There was information…Abies siberica, a conifer native to Siberia and other parts of northeastern Asia, reaching heights of 60’ or more…notable for the production of a resin that has anti-inflammatory properties which is used in herbal medicine. A couple of things puzzled me though. Some of the online literature described a plant with hard needles, (this fir is soft to the touch) and also stated the needle length was a bit shorter than what my fir presents. Perhaps it is a variant. More research is necessary but I  think I should be prepared for some epic height.

E. Philip Sheridan passed away in 2000,  and while I was online I searched to see if I could learn more about him. Phil was a retired English professor who dabbled in botany and zoology (I remember he once told me he had pet starlings). Everything I read confirmed what I knew of Phil: that he was a curious, generous soul and, like all gardeners, an avowed optimist.