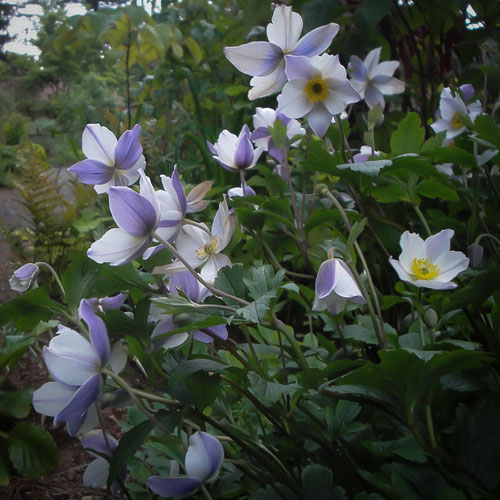 Like everyone else, we have fallen for Anemone ‘Wild Swan’.  Exquisitely simple white petals reversed in periwinkle blue surround a boss of yellow stamens in anemone like fashion and are held on 18-20″ stems. A hybrid of Anemone rupicola and possibly hupehensis,  it was selected by British plantswoman Elizabeth MacGregor a decade ago, and took her years to build up stock.  At last it debuted at Chelsea Flower Show in 2011, and caught the eye of many a gardener on both sides of the pond.

We finally acquired some tissue culture propagated plants in 2015. In its first year in the garden, ‘Wild Swan’ began blooming  in late spring,  then rested once the summer heat set in.  We found that in September,cooler temperatures encouraged  a second round of flowering stems. (In cool summer climates, the show may in fact carry on all summer. ) All of last year’s plants have come back up in the garden, after inconstant winter weather. We’re hoping for a more robust show this year.

Anemone x ‘Wild Swan’ enjoys a soil with good drainage and full sun or partial shade. It is hardy in zones 5-8.