End of the Season Containers 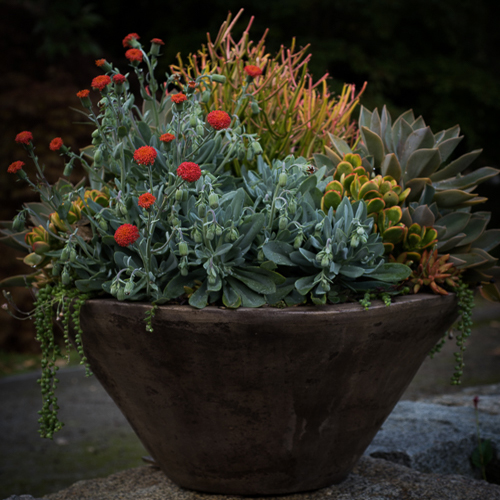 It’s been over 3 months since I posted the “Before” Container Shots. We’re now into October, and luckily the weather has been mild, with a few chilly nights. All in all, the containers depicted in the early summer post are looking as good if not better.  My goal each year is to come up with combos that are easy care and will look fabulous until frost.  Here are this year’s end of the season shots. 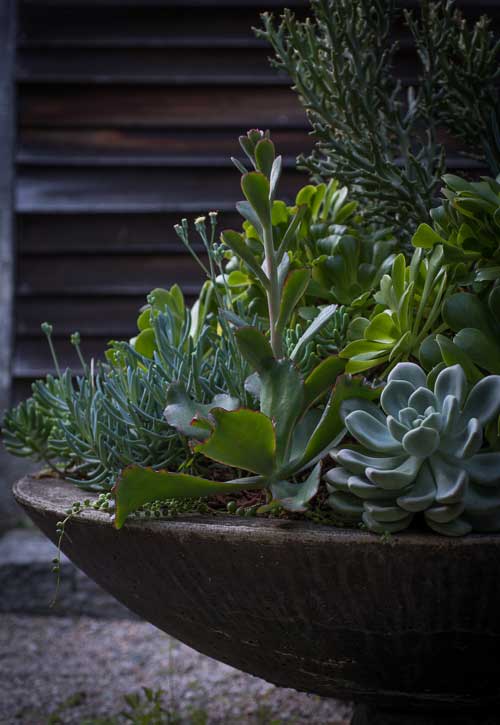 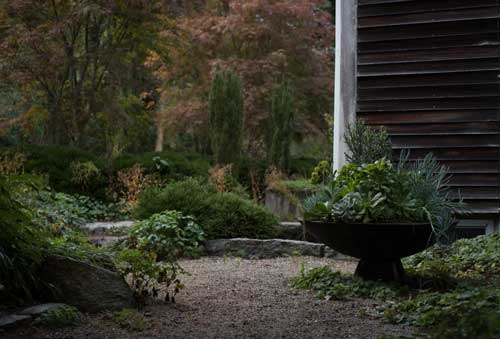 Succulents rule! The Aeonium noticeably is more green than bronzy, and  this space where the 36″ Zen Bowl is located is getting more and more shade…perhaps now only getting 3-4 hours of afternoon sun…it’s getting limited for succulents. I think we’ll have to reconsider what type of plants to use here next year. 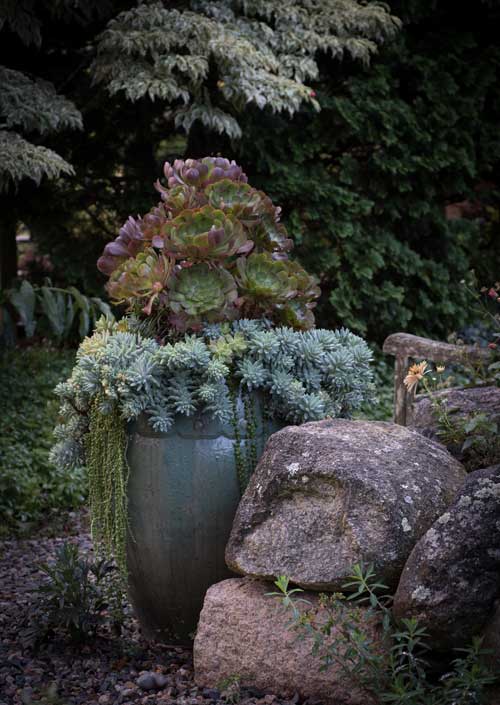 The Aeonium ‘Cyclops’ in the drum pot, with Sedeveria ‘Harry Butterfield’ and String of Pearls spilling over the sides, is still looking pretty awesome. I will be sad when we have to dismantle this container. 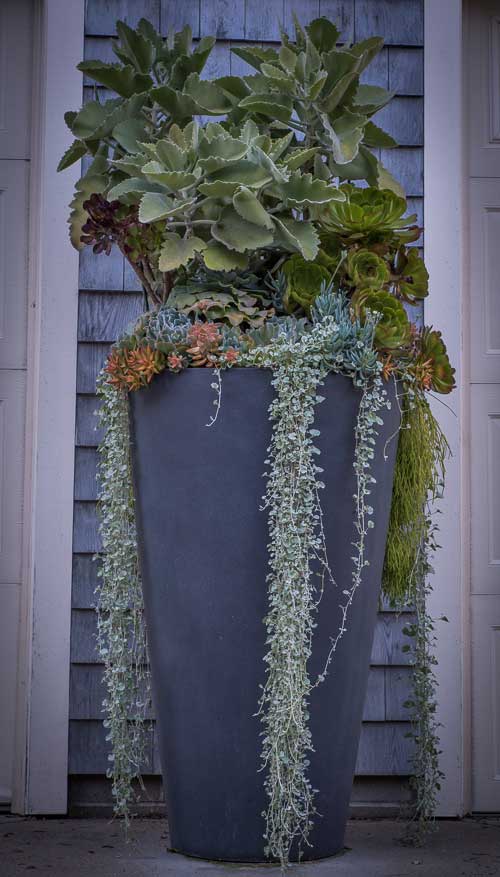 The Cylinder Pot in front of the garage is pretty much doing a repeat performance of last year. The big Kalanchoe beharensis started to overwhelm his neighbors, and was trimmed back several times. 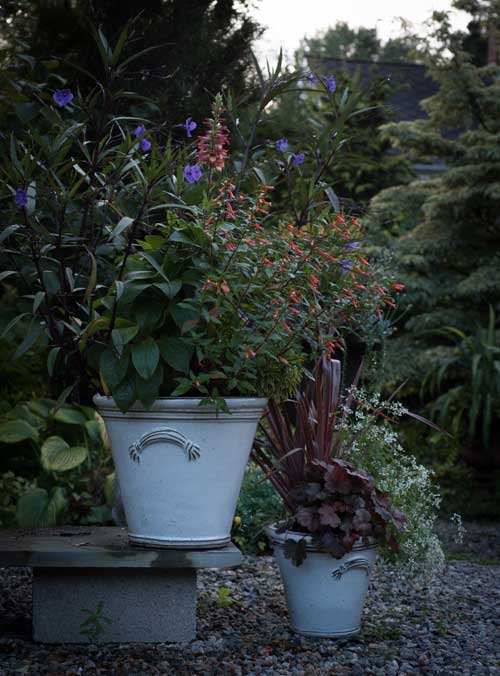 The larger white pot with Cuphea ‘David Verity’, Digiplexis ‘Illumination’ and Ruellia b. ‘Purple Showers’ needed watering attention, but is still blooming away. Not missing a step,  the smaller pot continues to look good with Heuchera ‘Cherry Cola’, Phormium and Euphorbia ‘Diamond Frost’. 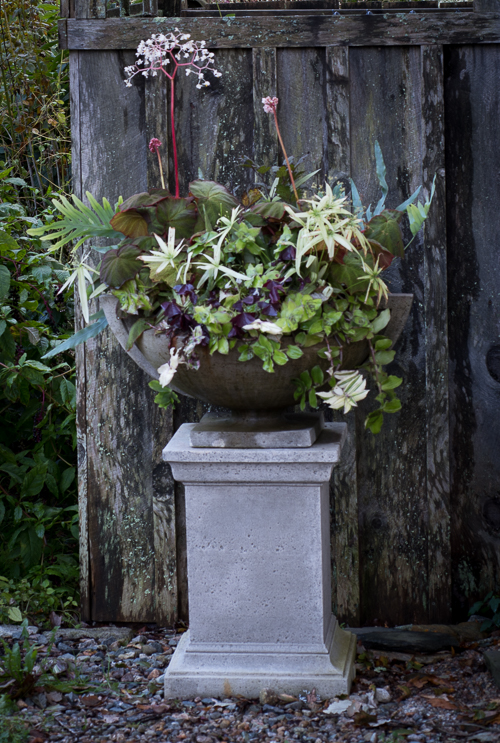 The Grecian Urn on the pedestal was one of the shade ensembles, with Begonia ‘Art Hodes’, Cyperus ‘Starburst‘, Oxalis, and Callisia congesta variegata, which needed to be cut back more than once. I know, I know, I put way too many ingredients in this pot. 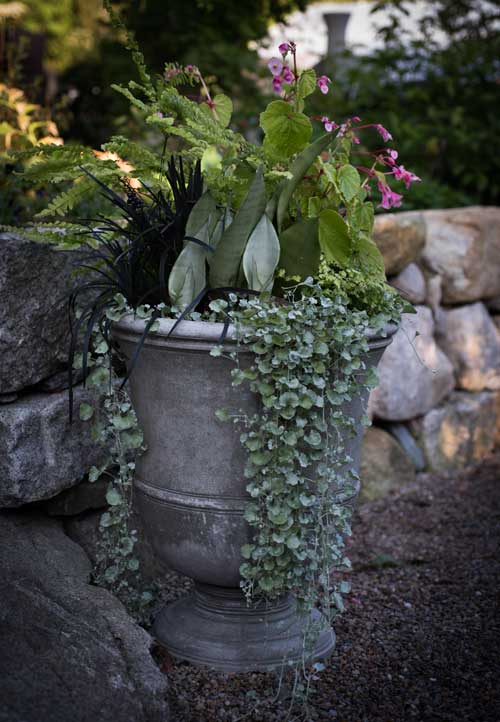 Here’s another shade planter, mixing hardy and tender plants. Maidenhair Fern, Black Mondo Grass and hardy Begonia grandis, are paired with tender Sansevieria ‘Moonshine’ and Dichondra ‘Silver Falls’. This planter was in dappled shade all day, and notice how well the Dichondra grew! 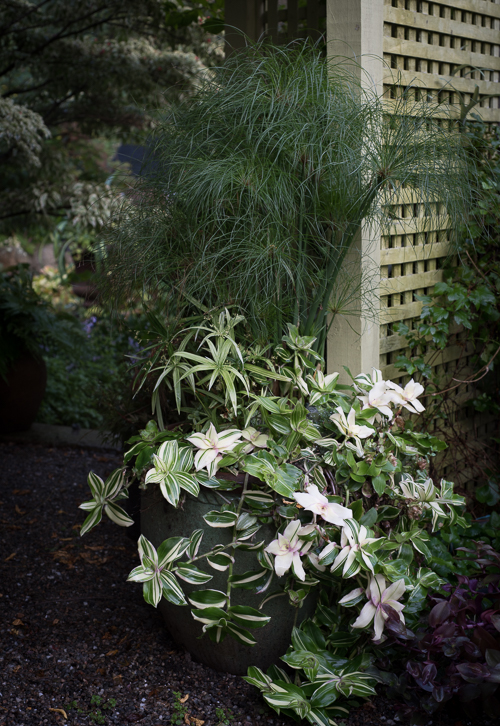 Papyrus + Papyrus  + Callisia = … To begin with, I selected too small a pot in June, so what did I do?  In mid summer, I lifted the plants that had filled the pot and moved them into a much bigger container. When the Ornamental Oregano had done her thing, then the Callisia was very happy to take over the pot. 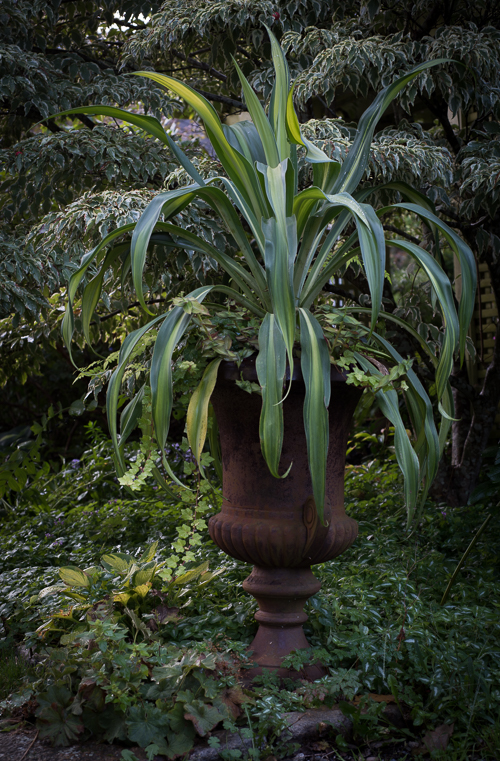 One of the iron urns is getting more shade than in previous years… probably just 4 hours of good sun, and then it’s in dappled light. Here is what it looks like now… the Beschorneria and Golden Ivy seem happy still. 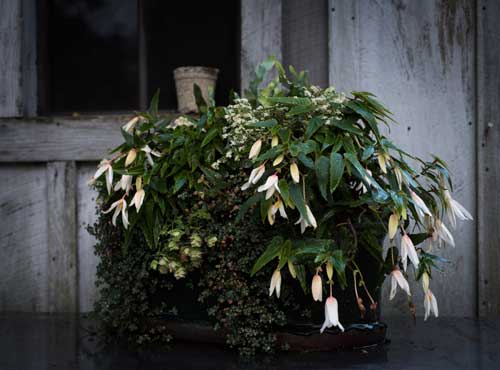 Someone bought the head pot…so I can’t show how it fared, but instead here is another shady planter. Never took the “before” picture, but I thought this green trough was successful. The white form of Begonia boliviensis seemed happier this year than in the past, and is paired with trailing Pilea glauca, Pilea microphylla variegata, Ornamental Oregano, and  Blue Rabbit’s Foot Fern, which is now pretty much hidden. 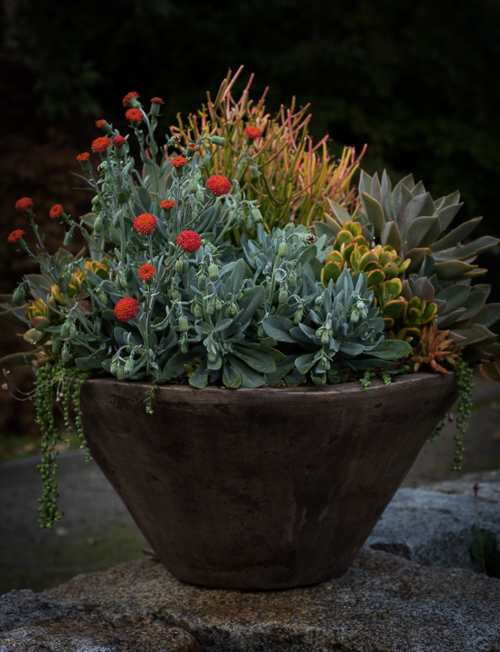 Last but not least, the brown terra cotta bowl wants to show off even more now that it is autumn. Assorted succulent foliage looked great all summer. Now, in October, the  Euphorbia tirucalli (Sticks on Fire) is beginning to deepen in color and Senecio ‘Blazing Glory’, bursting forth with orange red blossoms, is ending the season with a bang.

What easy care combinations worked best for you this summer? Have you been using succulents in your container plantings?