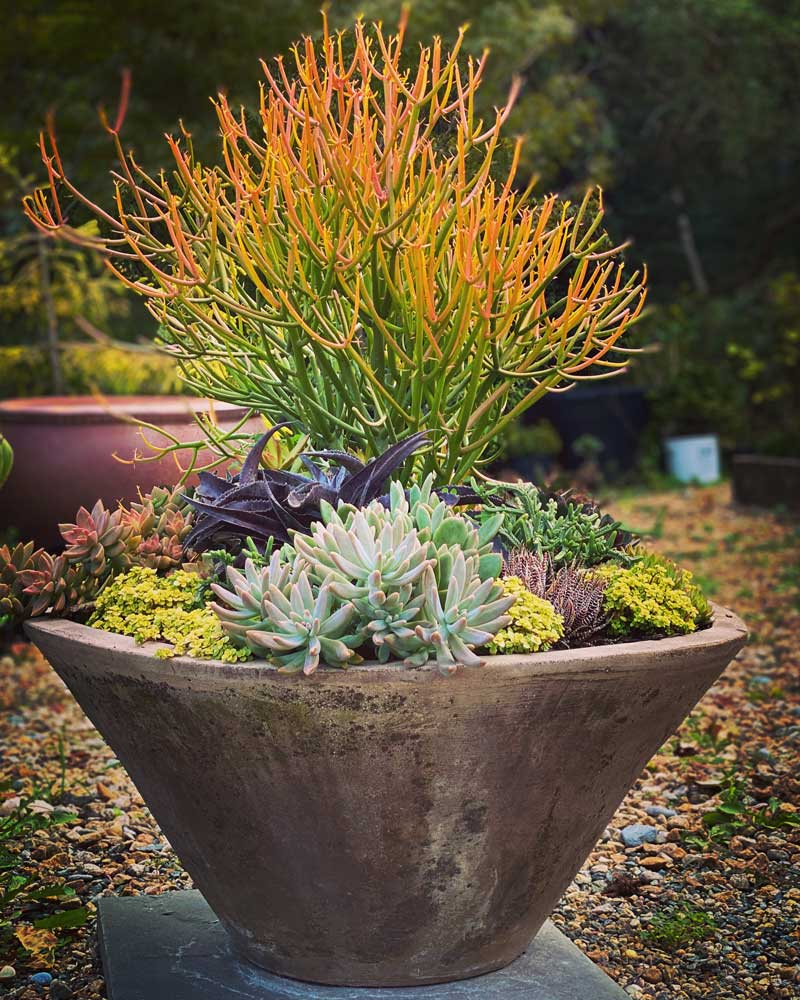 Two words sum up this summer’s weather here along the coast of southern New England: hot and dry.  Here at the end of September, our parched gardens are still waiting for the rain predictions to materialize.  Sigh.

The gardens are looking tarnished  but the container plantings held up better since their watering needs are more easily met. As in previous dry years,  our containers planted with succulents were the stars. (Check out the recent article NY Times garden writer Margaret Roach covered on succulent containers).

You may recall the June report post  which shows the “before” pictures. Now I’ll show you what some of these look like 3 months later, chewed up, cut back foliage and all. 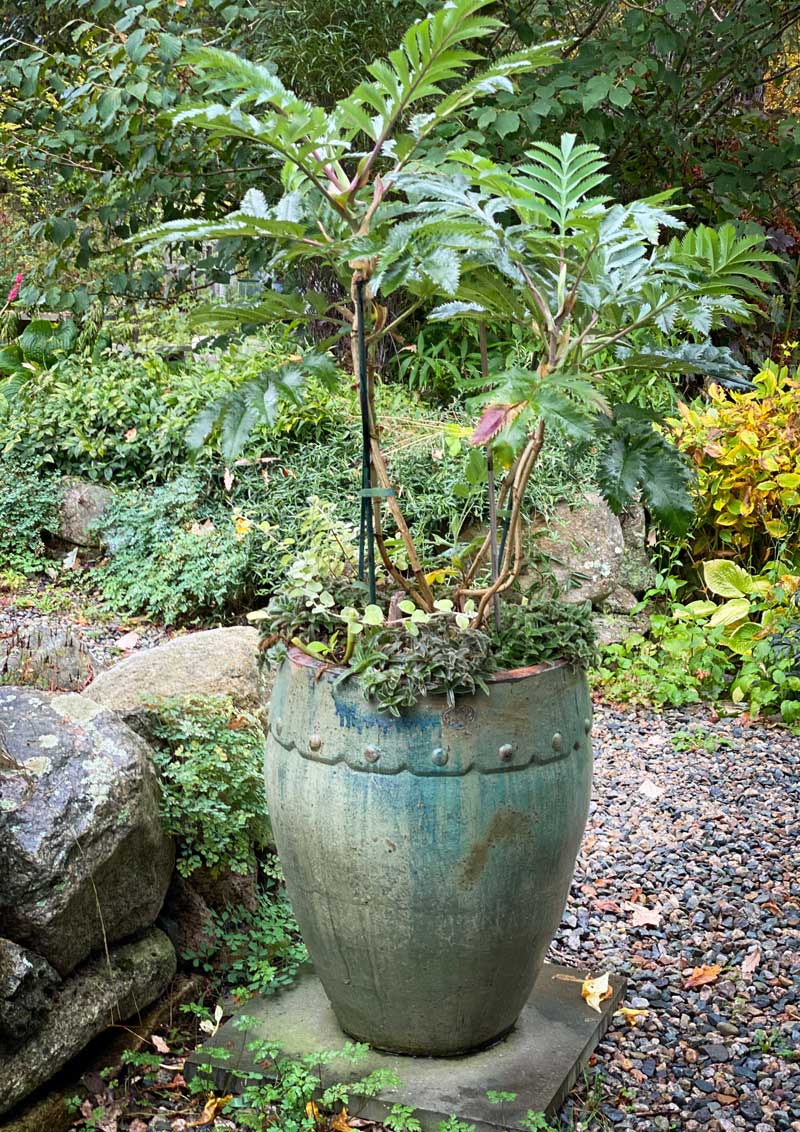 The Drum Pot: Melianthus major grew taller and the Helichrysum ‘Limelight’  (Licorice Plant) needed to get cut back after the American Lady Butterfly caterpillars made dinner of most of its foliage…what we do for the butterflies…The Jewels of Opar didn’t show off as much as I hoped, and was cut back a few weeks ago. The Tradescantia sillamontana did fine, but this planter combo won’t be repeated. 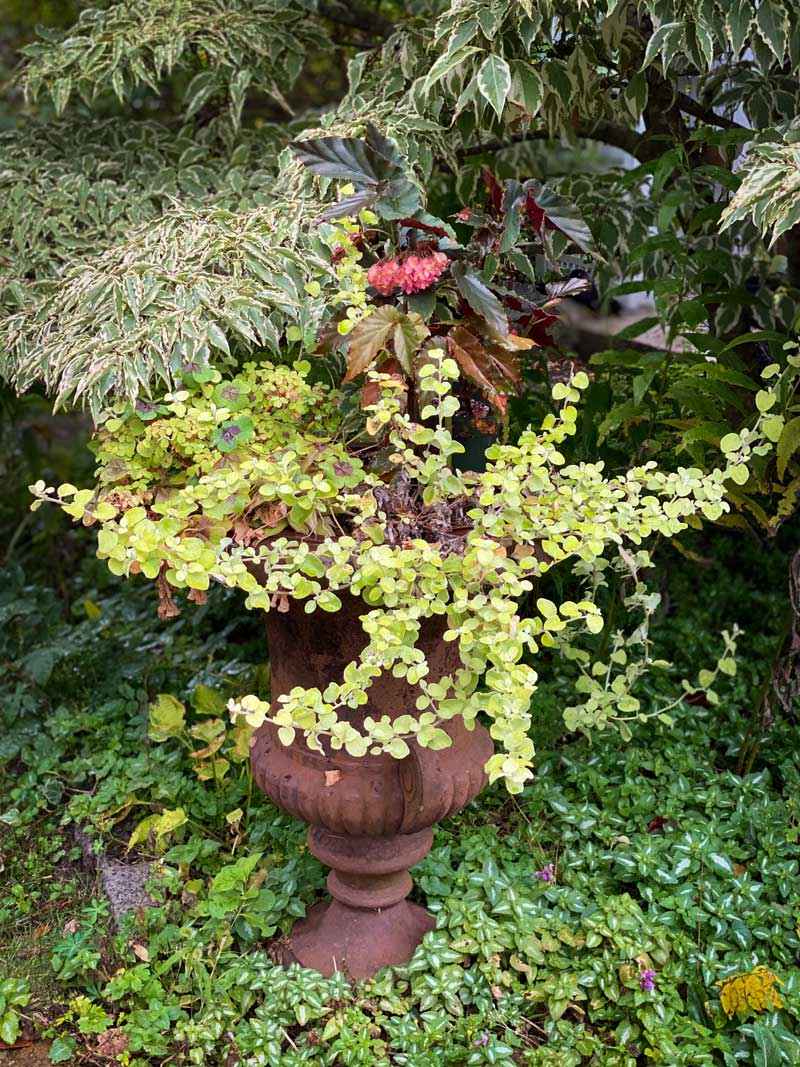 We have a pair of these iron urns that are always planted to match. They are in dappled shade most of the day. One of the pair really was over by the end of August (the one that I photographed in June). It did get a bit more afternoon sun. Its complement held up better…. here the Helichrysum took off after an early cut back, as did the Copper Glow Oxalis. The Oxalis ‘Iron Cross’ is now fading, Begonia ‘Ebony’ bloomed well and its dark foliage added height and contrast, but the golden Moses- in-the-cradle (Tradescantea spathacea) just couldn’t hold its own, and is in hiding. 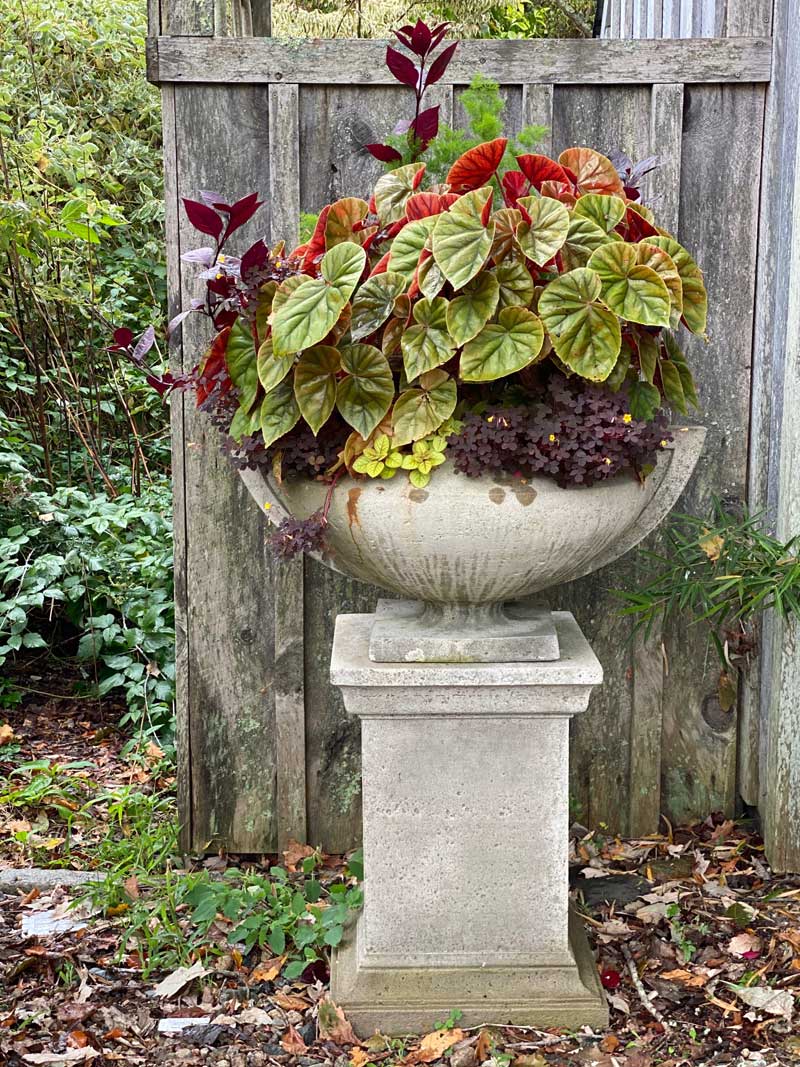 Another shady spot. Begonia thurstonii grew well, but held off putting out any flowers (not surprisingly). I used two 6″ pots in this vase, and probably should have used just one. The  mostly gold Plectranthus ‘Limelight’ is not a strong grower, and wouldn’t cascade down the pot as  hoped. The Oxalis ‘Zinfandel’ always does well and the ruby leaved Alternanthera did fine until some critter nibbled  its trailing stems. 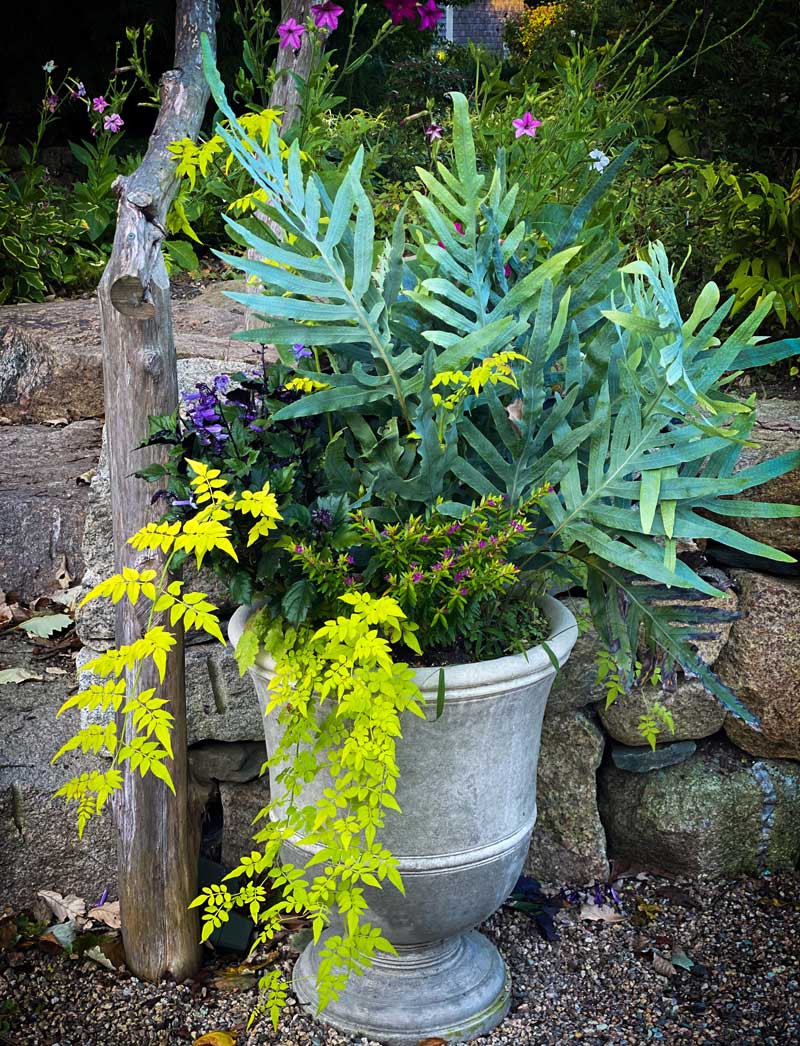 No complaints with this shady ensemble…Phlebodium aureum is my go to bold foliage shade container plant. Plectranthus ‘Mona Lavender’ is providing an end of the season supply of blossoms as is the Gold Leaved Mexican heather Cuphea hyssopifolia aurea. The golden jasmine vine’s foliage simply glows.

A pair of these hypertufa bowls, in the shade of our giant oak tree, were planted with ‘Moonglow’ Snakeplant (Sansevieria), Dichondra Silver Falls’, Pilea glauca and Liriope ‘Okimo’  (all selected for durable attractive leaves. The white flowered form of Black Eyed Susan Vine was the flower power plant, and it bloomed well until a  couple of weeks ago.  Figured a few mini pumpkins could add a little fun now. 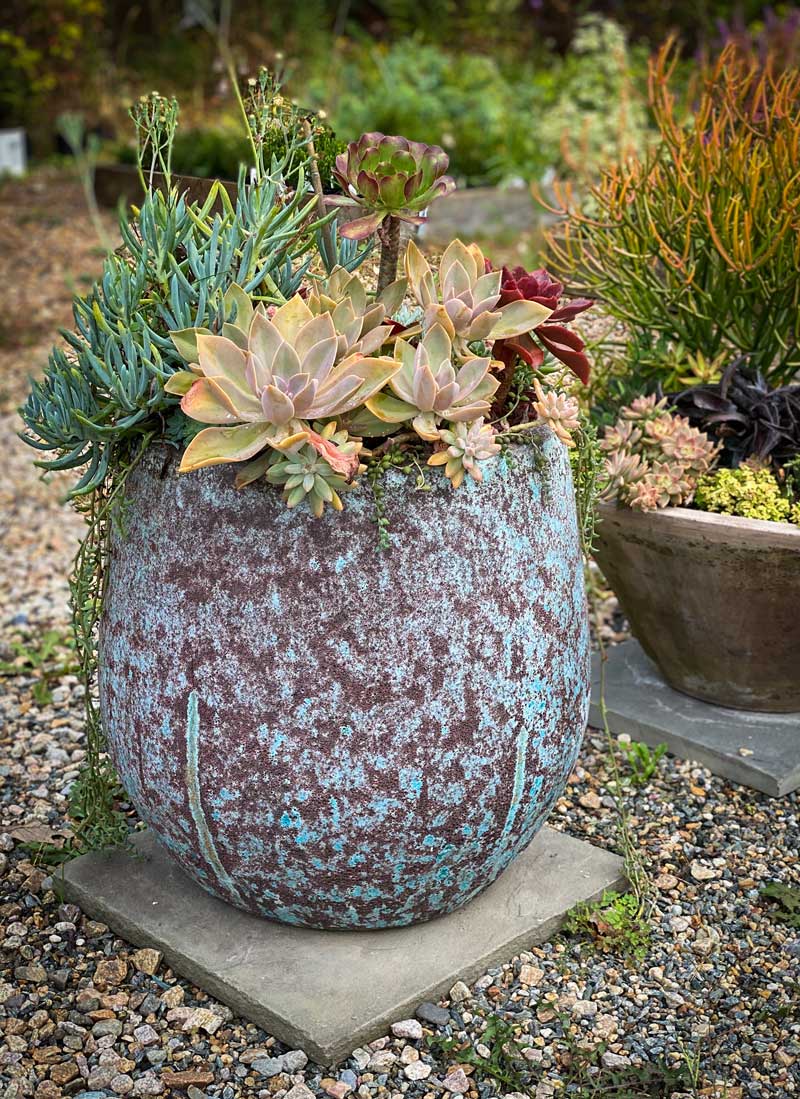 And now, for the sun and heat loving succulents! This beautiful container, in itself, is eye candy….the foliage colors of the succulents were selected to complement it, and all did fine except for the tall Aeonium that had a mishap and lost it’s tallest stems. Blue Senecio talinoides and beige-pink Graptoveria ‘Fred Ives’ obliged by filing in much of the horizontal space.

End of day light and cooler night temperatures bring out the glow of Sticks on Fire, Euphorbia turicali, with the Mangave ‘Desert Dragon’ added dark contrast. Graptosedum ‘California Sunset’ on the far left, yellow leaved Sedum mackinoi ‘Ogon’ and blue gray pink Graptosedum ‘Francesco Baldi’ filled in the foreground.  This will look good right up until the frost. (Please, frost, wait until November.) 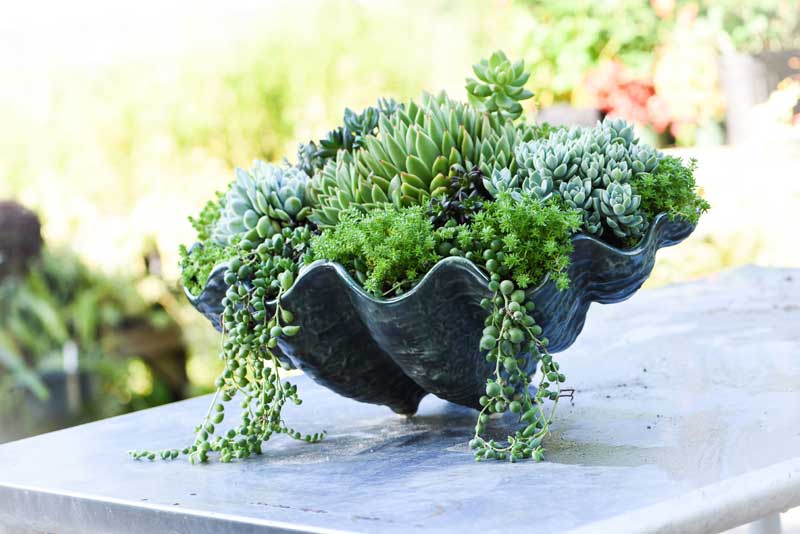 Someone purchased the seashell planter shown in the June post, but we did another version for a client.  This image was taken at at the end of August, but the ensemble is still looking fabulous. 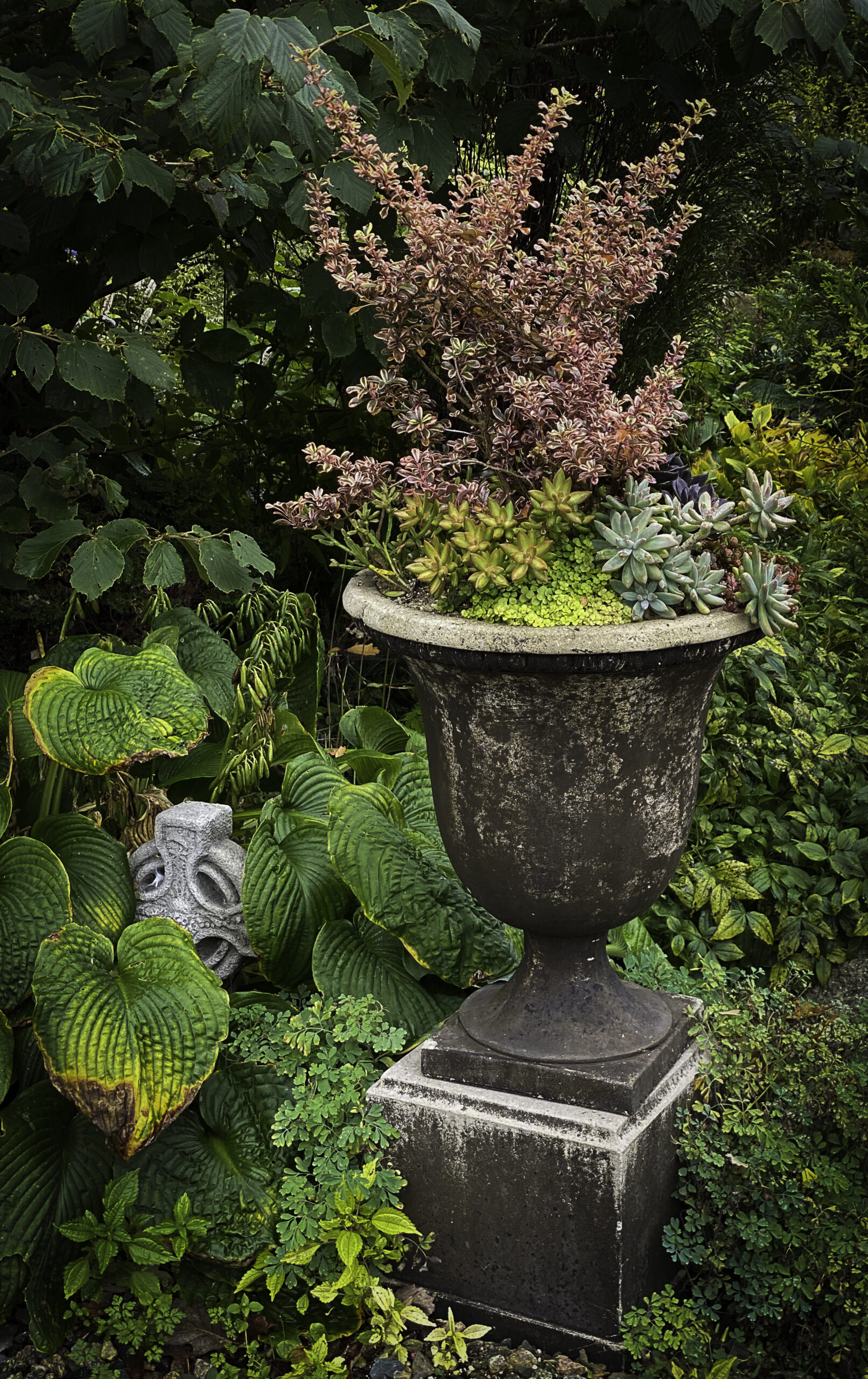 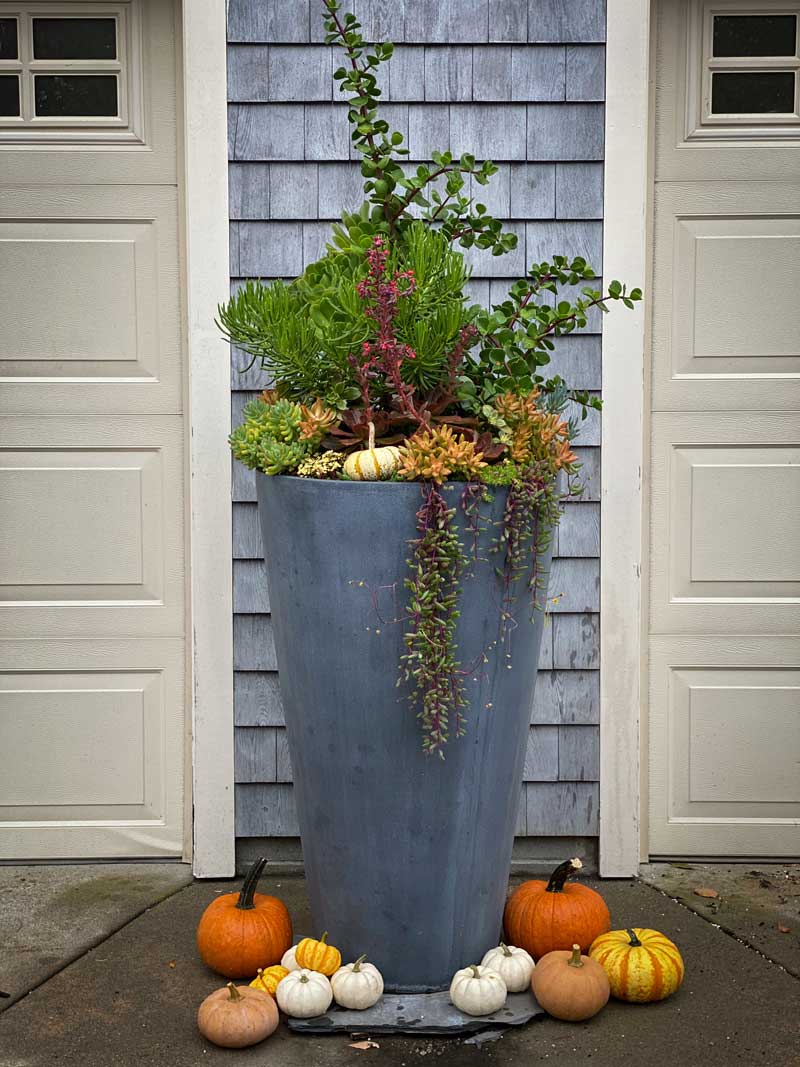 Our tall cylinder pot, each year planted with a different  array of succulents, caught visitors’ eyes when they entered the parking area. Everything did extremely well with just an occasional watering, although some creature nibbled and pulled out some of the trailing Othonna capensis ‘Ruby Necklace’.  The tallish green succulent with the arching branches is the large leaved form of Elephant Plant, Portulacaria afra macrophylla. Adding an array of pumpkins helps carry this container into the fall season.

In summary, we had a hot and extremely dry summer, and one group of plants, the succulents, met this year’s challenge beautifully.  I realize this blog post reaches folks in all parts of the country, and your area may have benefited from  more summer rain. If so, what plantings were you most impressed with this year ?