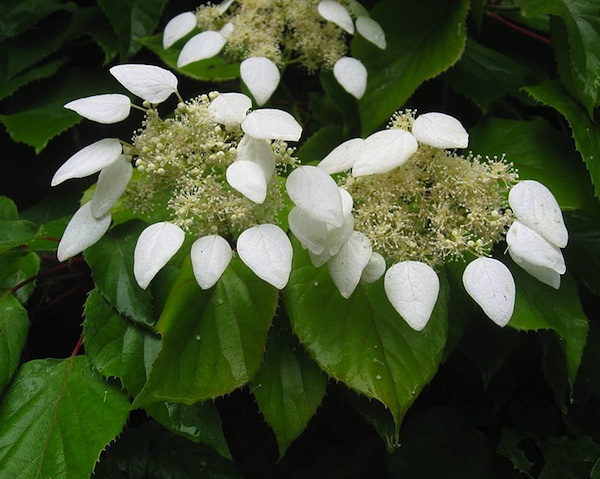 I’m surprised that Japanese Hydrangea Vine, Schizophragma hydrangeoides, isn’t planted more often. You can easily see the similarities to Hydrangea anomala petiolaris, the common climbing Hydrangea, but in my opinion it is a much prettier plant, and becomes established more quickly. It grows well in sun or quite a bit of shade and is hardy in zones 5-9.

Schizophragma hydrangeoides differs from Climbing Hydrangea in it’s growth habit and its blossoms differ slightly as well. Schizophragma grows rather flat against it’s climbing surface, attaching by aerial roots, as opposed to Climbing Hydrangea which sends out protruding branches. It is quite handsome climbing up limbed tall trees, as well as trained along a tall wall, reaching 20-30′ with time. In late June and July, 8-10″ flattened corymbs of tiny fragrant white fertile flowers ringed with showy heart shaped sepals appear, and age wonderfully through the season. (If you study a Climbing Hydrangea blossom, the sterile flowers are actually composed of 4 sepals.) There are several good cultivars to choose from: Schizophragma hydrangeoides ‘Roseum’ has lovely rose flushed sepals, and Schizophragma hydrangeoides ‘Moonlight’ has beautiful blue green ovate leaves with a silverly overlay, and the same large white flowers. Fall foliage on all forms takes on various hues of red, and in warmer climates, sometimes yellow tones.