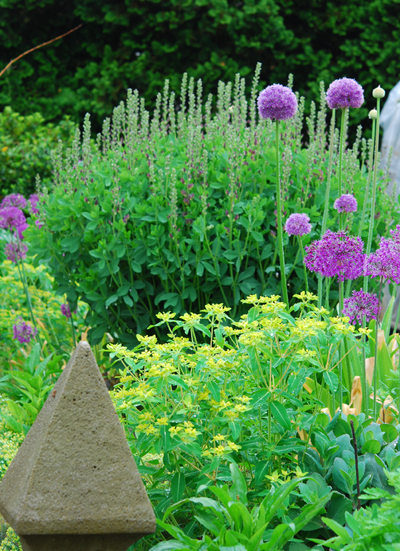 Baptisia ‘Twilight’ adding height in the background, with Allium and Euphorbia

I often like to tempt you with plants which I suspect you may be unfamiliar with, but a walk about the garden convinced me to laud praise on our garden stalwarts. In particular I’d like to reacquaint you with my old perennial favorite, Baptisia, and its recent reincarnations.

Baptisia, commonly known as False Indigo or False Lupine, was one of the perennials we planted in our first garden 25 years ago, and that same B. australis, introduced as a young seedling, still surges forth each spring with vigor and good looks.  Baptisia is not a only long lived plant, it is also one of the first perennials which add height to the late spring border, shooting up to and eventually forming clumps of 3? or more. The early size factor adds greatly to it?s value. The flowers are displayed on showy spires and resemble lupines. It is a great compliment to the other late spring stars: Peonies, Iris, Euphorbia and late bulbs like Allium.

The most common species you’ll encounter is B. australis, with typically violet blue flowers and a height of 3-4′ and equal width. Other species you may commonly encounter include B. alba, (with white flowers) and B. sphaerocarpa (yellow), and to some extent B. bracteata. In recent years hybrids have been made crossing the species, alternating host and pollen plants. Ron Gardner introduced ‘Carolina Moonlight’ after  successfully crossing B. alba and B. sphaerocarpa in 2002.  Jim Ault of the Chicago Garden has developed a number of great cultivars by crossing B. australis and sphaerocarpa resulting in named forms B. ‘Solar Flare’, ‘Twilight’, and ‘Midnight Prairie Blues’. Hans Hansen has developed more crosses are becoming available such as ‘Lemon Meringue’and ‘Dutch Chocolate’. 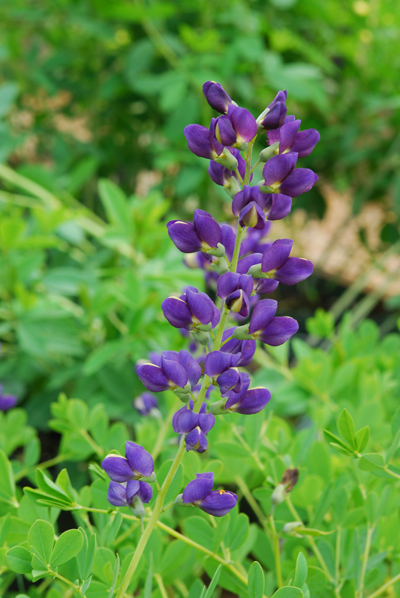 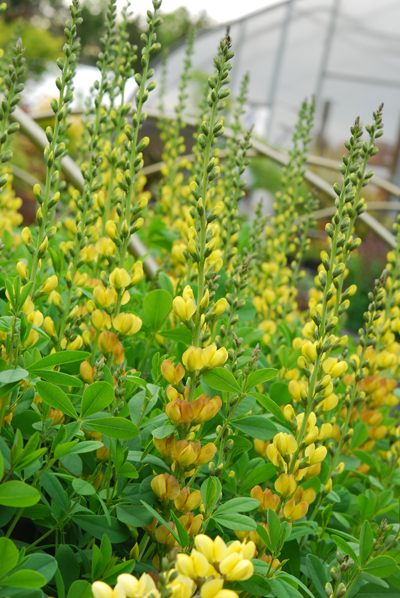 A form we grow in our gardens which always draws comment for it’s compact habit is Baptisia australis var minor. It forms a low 2”mound of dense blue green foliage with typical large blue violet flowers, but long after the flowers fade, B. australis var minor  shows off with its tidy appearance . Another excellent but slow growing form is a selection made by Brian Megowan of the legendary Blue Meadow Farm: B. ‘Esther’, with her white flowers born on dusky slate stems. We’re rooting stem cuttings of her now, in hopes of having young plants for sale next spring. 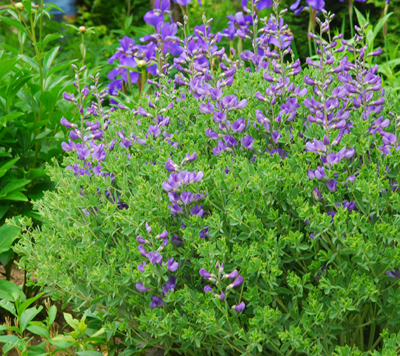 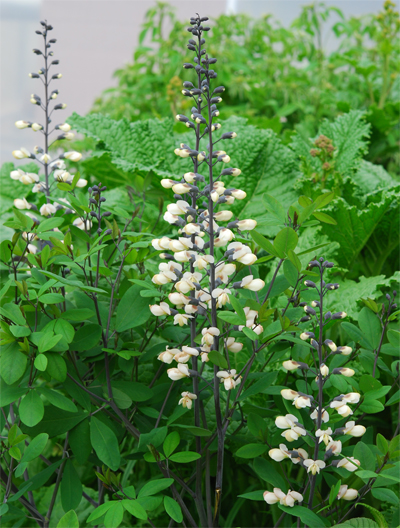 Some things to note. Baptisia are prairie plants and like a sunny well drained soil. Baptisia australis is the hardiest of the group, tolerating cold zone 3 winters. Baptisia alba and sphaerocarpa are hardy through zone 5. The hybrids seem to fall right in the middle with hardiness tolerance of zones 4-9. Baptisia species can be grown from seed, but her clones are vegetatively propagated. Baptisia develop deep tap roots, so division isn’t easy, although it can be done, but expect some die back and a slow recovery.

2 thoughts on “In Praise of Baptisia”