New England’s weather challenges even the most experienced gardener. The summer of 2013 certainly gave this gardener a dose of humble pie. Spring arrived late but was quite lovely for several weeks. June was cool and adequately moist (some folks in western New England were deluged with rain, but we were happy here with what we received. July was tropical. Hot, humid, humid, did I say humid? And there are plants that loved the tropical weather: Colocasia, Coleus Papyrus, Canna. Unfortunatley I hadn’t planned on hot humid weather, so I didn’t plant many of them this year. No this year I couldn’t plant enough succulents; in the ground, in containers, in vertical gardens. It could have been a better summer for growing them, but they managed to carry on sullenly and perked up when August proved to be cool and dry. And now we are here, at the end of the season, to judge which of the containers held up the best over the 3 month period. (See the June article: The Before Pictures  for evidence of how containers transformed.) 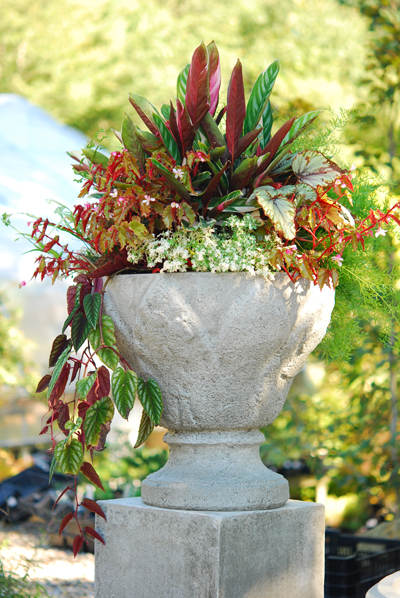 The Cissus had to be cut back. Begonia ‘Concorde‘  has resented the recent chilly nights. Still this has been an easy shade loving combo which I would repeat. 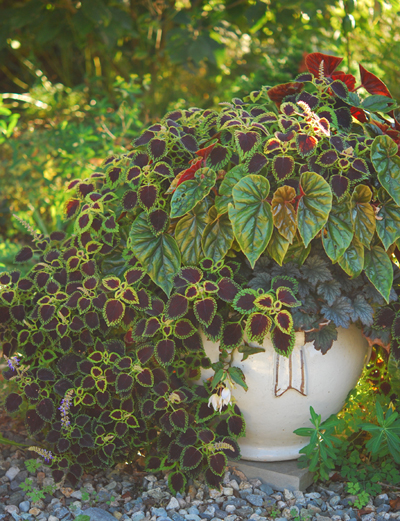 Coleus ‘Odalisque’ dominated this planter, Begonia thurstonii has held its own, but can’t say the same for the Begonia ‘Elegance’ (there is a glimpse of what’s left of it). Our Begonia boliviensis hybrids and and most of our Fuchsia really pooped out early this year. 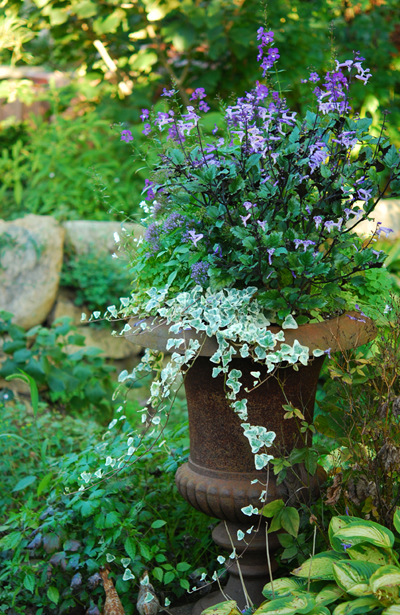 This partial shade planter wasn’t shown in the June post, but it has been quite lovely all summer. Plectranthus ‘Velvet Elvis’ is really starting to bloom now. Why don’t people grow more of the interesting trailing ivies? 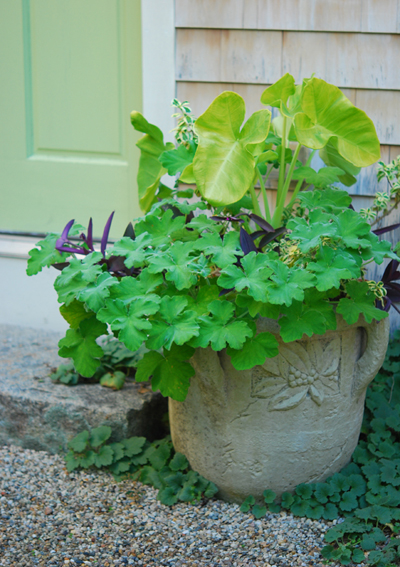 I was a little disappointed that the Xanthosoma didn’t explode with growth, but the gentle green foliage of Pelargonium tomentosum looked fresh all summer, and I love to rub its leaves as I walk by. 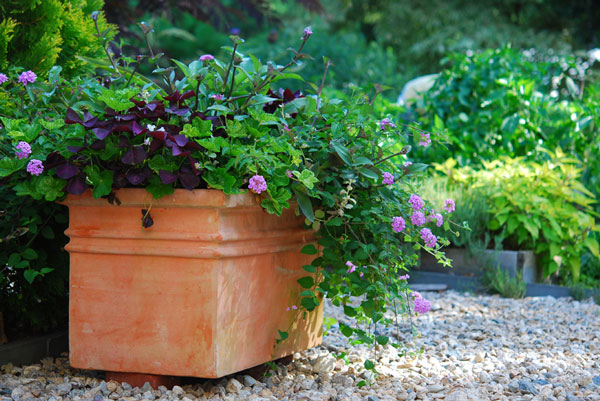 Once the Eucomis bloomed, that was that, and then the Lantana montevidensis with its profusion of lavender flowers on wiry stems took over. Oxalis triangularis never disappoints, and Tradescantia ‘Blue Sue‘ filled in nicely. 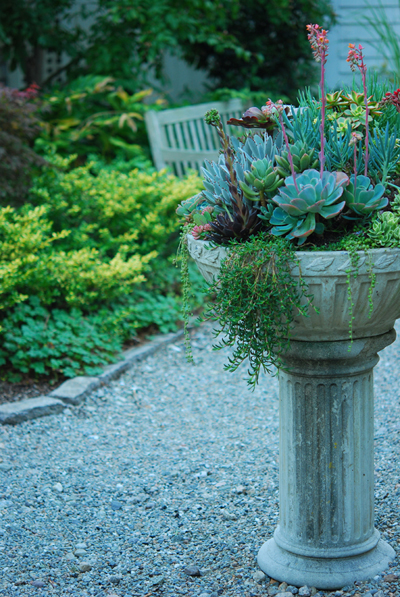 We have planted this classic stone bowl with succulents for the past few years, but this year’s growth was the least impressive. Not bad, but look what it did last year. 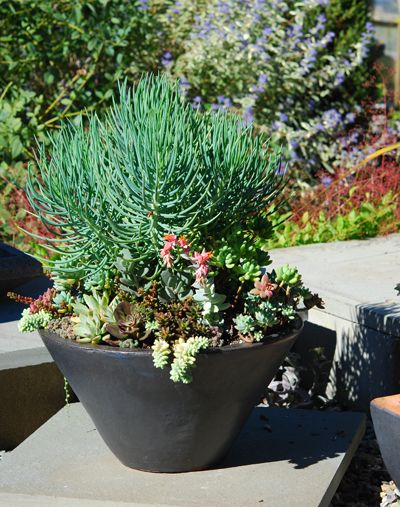 Only the Senecio cylindricus put on growth. I think all the other succulents just sat there. At least they didn’t melt. 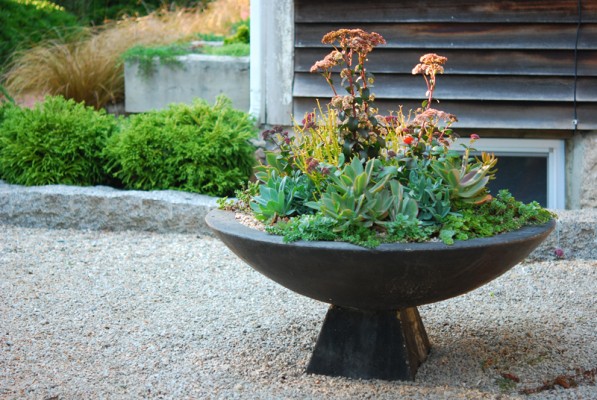 This bowl was planted around the 4th of July, with a mix of hardy and tender plants. The Senecio ‘Blazing Glory’  is beginning to bloom with it’s bright orange buttons. I like the hardy Sedum ‘Turkish Delight’ but next time would leave out the Sedum ‘Xenox’. 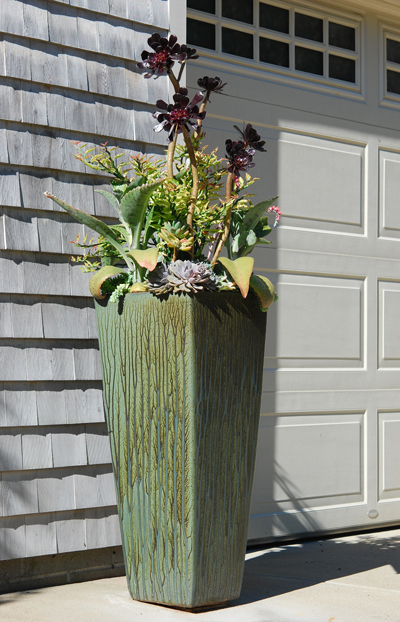 We moved our famous River Pot to a more prominent spot. What wouldn’t look great in this pot? 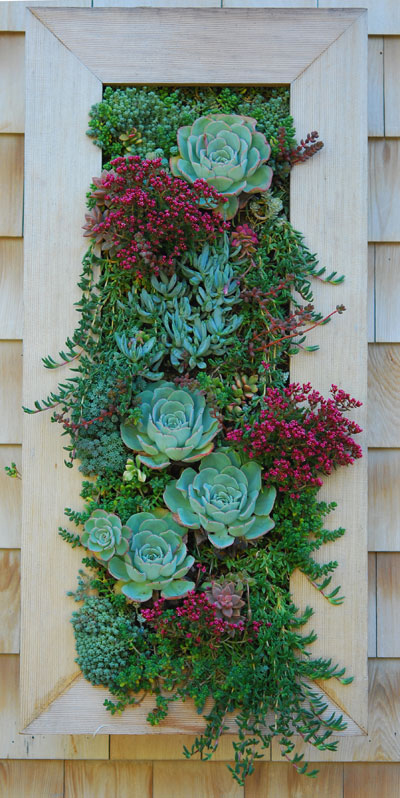 The vertical garden is still looking sweet. The Crassula schmidtii has been in bloom for weeks, and the Echeveria ‘Atlantis’ continues to want to send up flowers.  I made several  versions of these vertical gardens, experimenting with just hardy plants and mixing lots of different tender succulents. Some succulents grew well despite the weather, others were more temperamental. 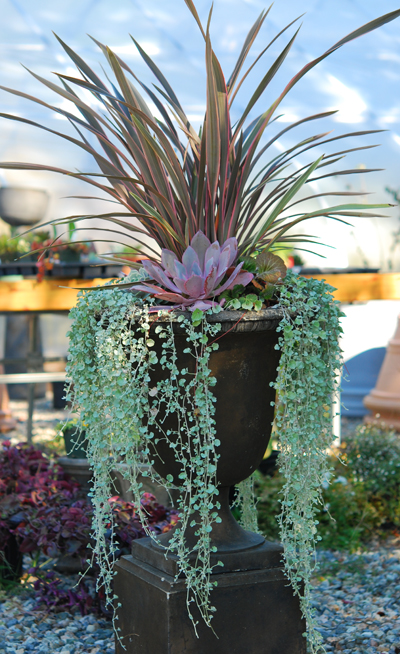 This container continued to inspire customers to replicate it all summer. The grouping is Echeveria ‘Afterglow’ and ‘Lola’, Phormium ‘Pink Stripe’, Saxifraga ‘Maroon Beauty’, and silvery Dichondra.

What was your summer weather like and  how did your containers fare this year?