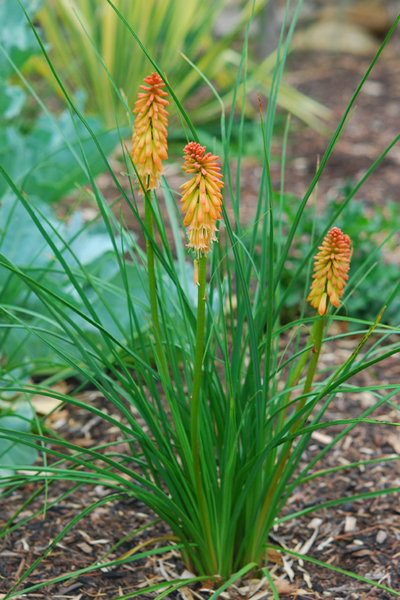 One look at Kniphofia and you might be able to guess its native habitat is Africa.  Commonly called Torch Lilies, or Red Hot Pokers if you prefer, this member of Xanthorrhoeaceae family (not Liliacea, the Lily family) forms upright grass like foliage clumps from which rise spires of beautiful multi-toned tubular flowers beloved by bees, butterflies and hummingbirds. There are over 70 species, some of which are not hardy in northern climates. Most species bloom during northern hemisphere summers, but there are a few forms that will bloom when summer arrives in S. Africa, that is to say, December.

Recently Terra Nova Nurseries introduced a line of dwarf hybrid Kniphofia which they affectionately called the Popsicle Series. These dwarf selections have foliage that grows 12-15″ tall, with flower stems reaching 18-24″ depending on the cultivar. Blooming begins in mid July (for us), with flowering stalks continue to emerge right through September. We planted a half dozen of the form ‘Creamsicle‘ last summer,  with its bright to pastel yellow orange coloring and they wintered over well, so this year we tried 2 new selections… ’Orange Vanilla Popsicle‘, with a toffee orange to cream tones and ‘Pineapple Popsicle‘ with a tart pastel lemon to chartreuse coloring.

Plant Kniphofia in a soil with good winter drainage and in full sun. It provides a 2 exclamation point to beds when used in small groups, or would be stunning used en masse in a larger setting. Kniphofia is a great companion to Euphorbia such as Ascot Rainbow and almost any Sedum. It can be sited in the foreground of a mixed shrub border…we have it coming up through a sea of steel blue Shore Juniper. 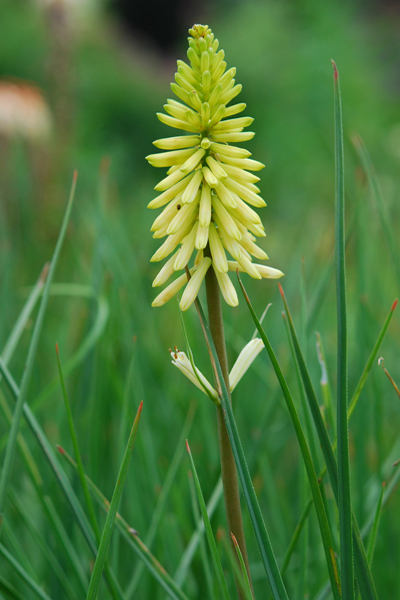 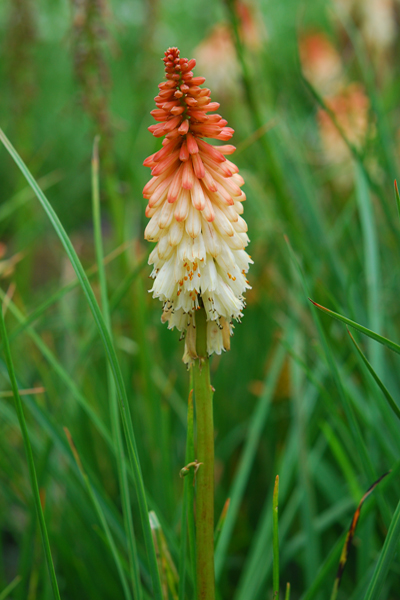