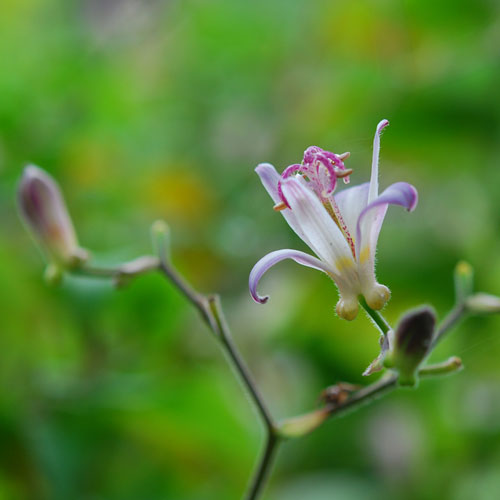 A must have plant for the late summer/fall shade garden is Tricyrtis hirta, commonly known as Japanese Orchid or Toad Lily. There are numerous cultivars; one I am especially fond of is the selection ’Tojen’ , with has unspotted lavender, orchid like flowers held in loose sprays on sturdy stems above large lush foliage.

Toad Lilies enjoys a rich welled drained soil that stays adequately moist in the growing season. ’Tojen’ is more forgiving of drier soils than other cultivars, but I recommended keeping the soil irrigated to keep plants at their best in late summer when they really show off. ‘Tojen‘ grows 24-30” tall by 30” wide and is hardy in zones 5-8. Some great companion plants are Kirengeshoma palmata, Begonia grandis and late blooming Hosta such as ’Red October’.