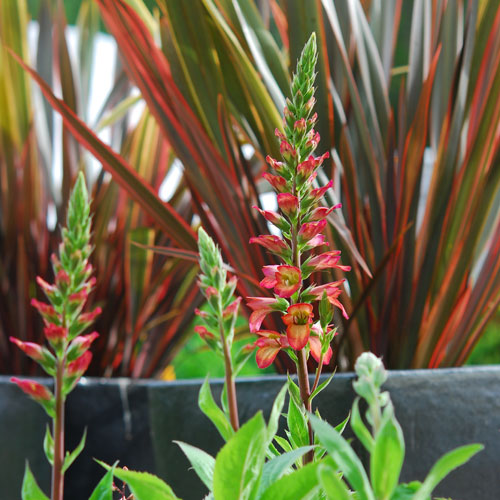 Sometimes amazing things happen when you cross similar plants from different regions: Digitalis (European Foxglove) and Isoplexis (Canary Island Foxglove. The result: beautiful perpetual blooming 3′ spires of tubular flowers, which are colored sunset coral in bud and then open, exposing yellow throats with hints of apple green. This particular selection, ‘Flame’, is the first of the Illumination series introduced by Charles Valin which won the prestigious award of Best in Show at the Chelsea Flower Show in 2012.

Last year we grew Digiplexis ‘Flame’ in a large pot. It began to bloom in early June and carried on for months, well into September. The blossoms are sterile, which tricks the plants to be constantly in flower.  We brought the container into the cool greenhouse to winter over and it’s back up and about to start the show all over again. This year we’ve also planted it in our garden beds for the constant color it provides. We envision it as the vertical complement to Dahlias and Summer Phlox in a sunny, enriched , well drained border which gets an average amount of irrigation. I can attest that the hummingbirds were regular visitors, as were bees and butterflies, and I suspect it is deer resistant as well.

Because Digiplexis inherited its hardiness genes from its Canary Island parent, it will only winter over outdoors in zones 8-10, (although one of our customers bragged to me the other day that hers wintered over outdoors in a protected spot in zone 7).  Dig  up the roots after the first frost, as you would a Dahlia and store in a cool spot that stays above freezing for the winter. Gardeners in warmer winter climates don’t have to worry about this, and I can only imagine the display in their garden year after year!