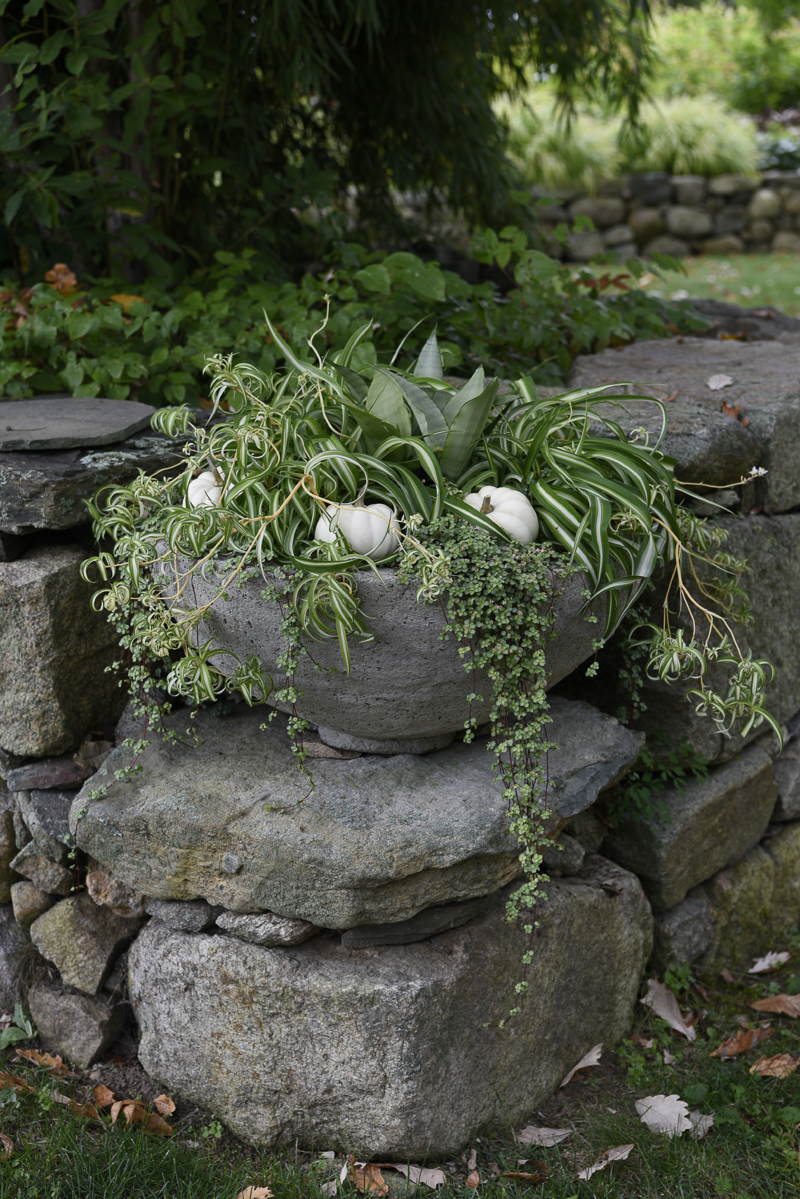 It’s October 20th, and although we’ve flirted with temps in the low 30’s…we haven’t had a frost yet! We had reasonable summer weather, although not much rain in August and September. The containers we planted in June have held up well, although a few plants had to be edited out or cut back midseason. Once again, the containers based on foliage plants and succulents fared the best. 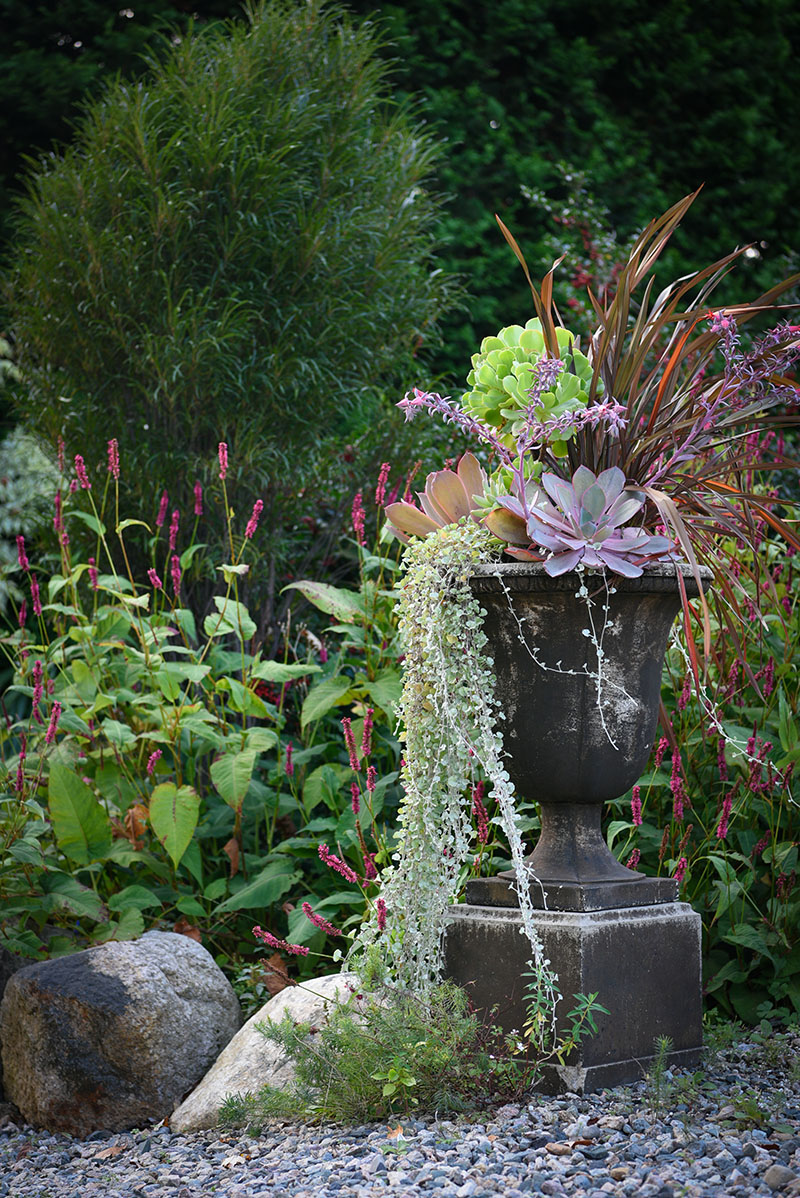 One of our go-to combos: Phormium, Echeveria, Aeonium and Silver Falls Dichondra 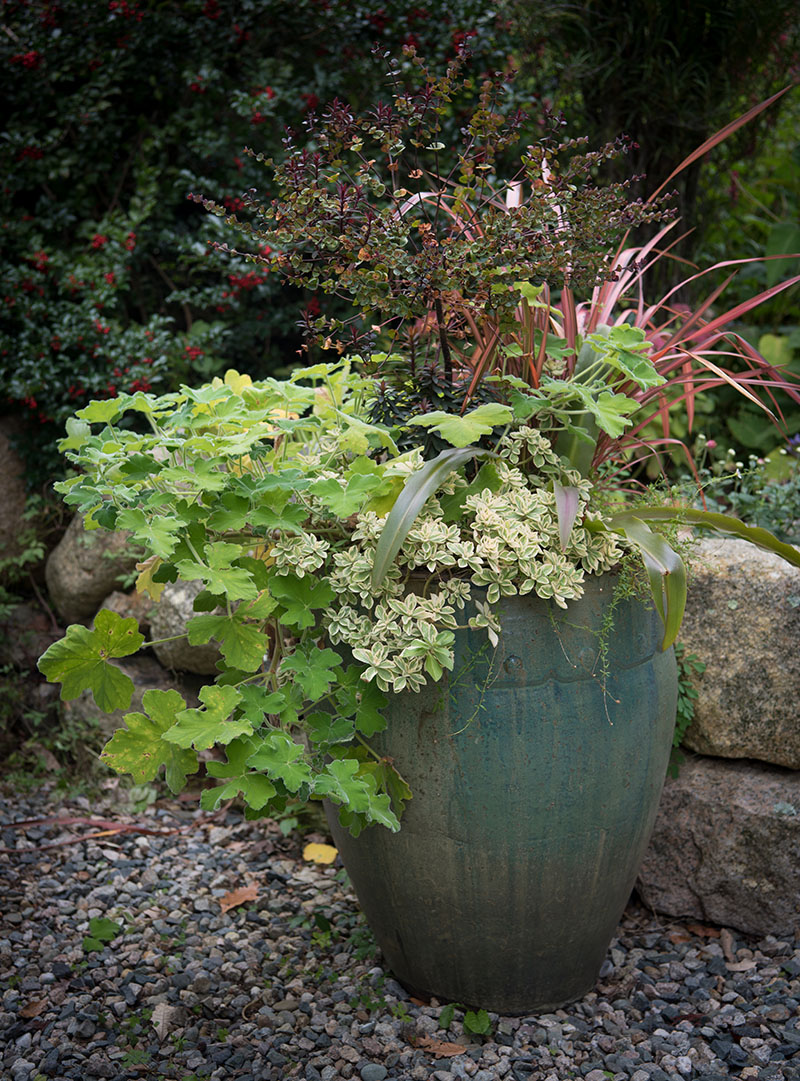 Pelargonium tomentosum overwhelmed one side of the drum pot, but we didn’t mind as we love to rub the minty scented leaves as we pass by. The Euphorbia ‘Blackbird’ held its bracts all summer.  Plectranthus neohilis ‘Gary Hammer’ added its own aroma.  And Erigeron karvinskianus received a cut back a few weeks ago and has decided not to perform anymore. 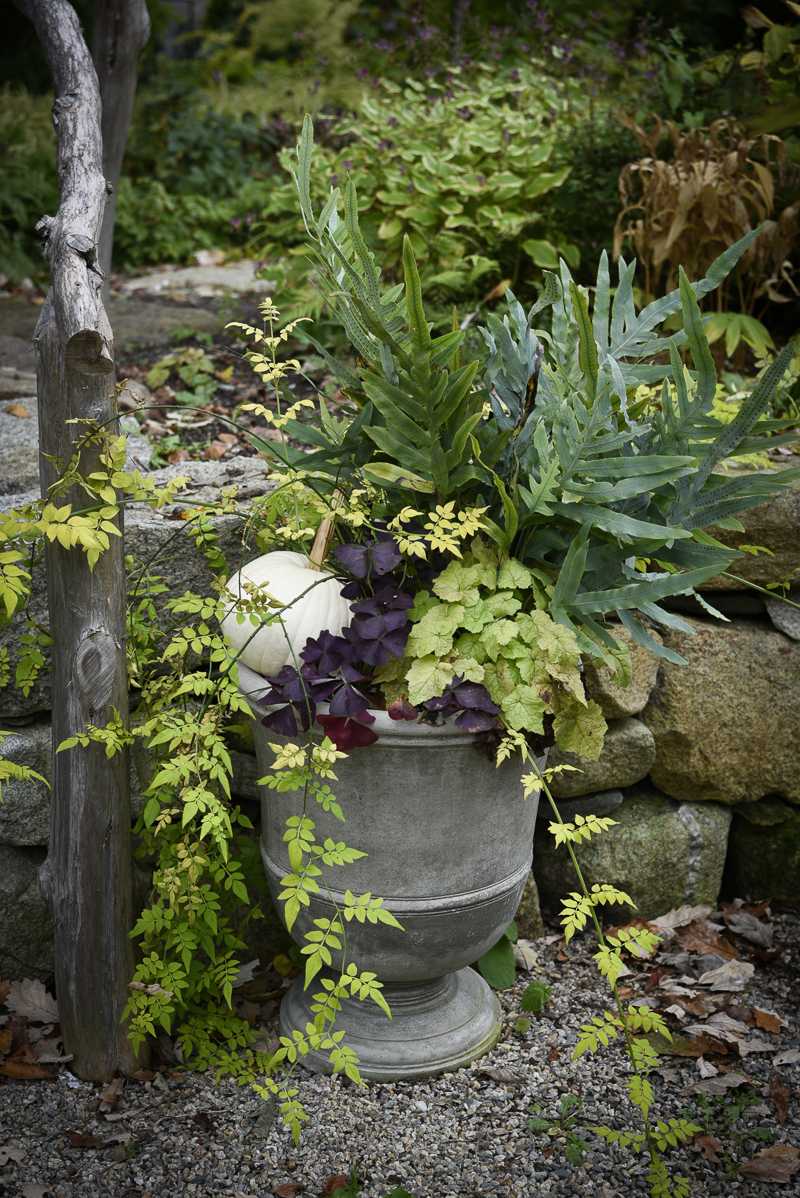 Phlebodium aureum (Rabbits Foot Fern) is an easy solution plant for shade containers. The yellow leaved jasmine ‘Fiona’s Sunrise‘ trailed about, the purple Oxalis triangularis carried on as did the Tolmeia ‘Cool Gold ‘. 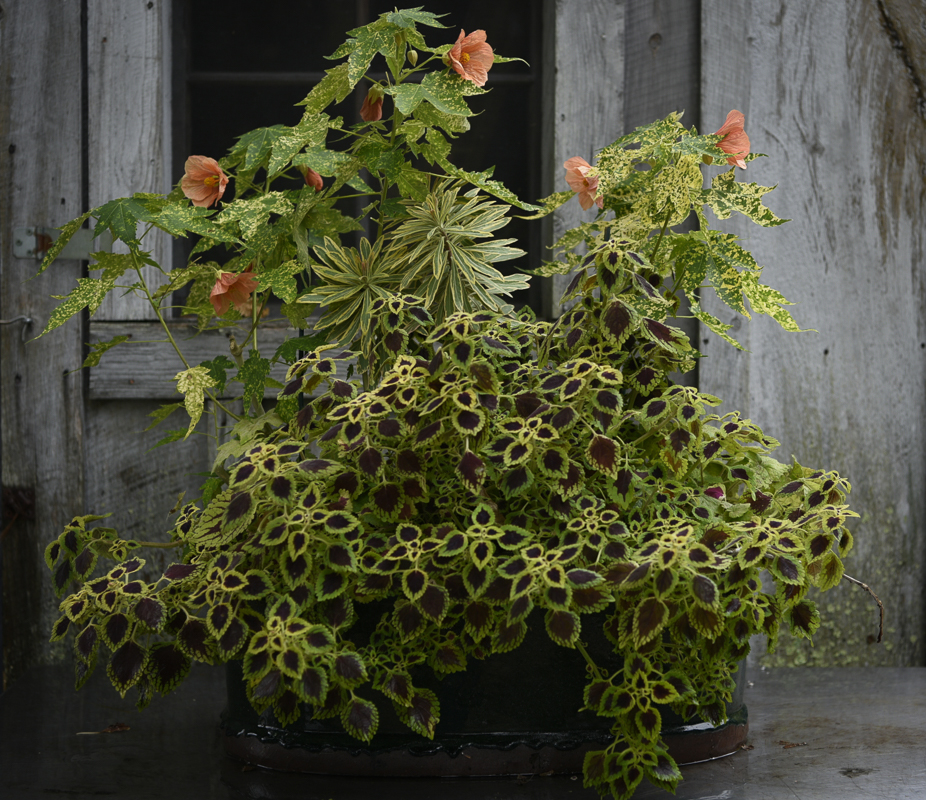 This planting received ooh’s and ah’s when I shared on Instagram back in June….then everything grew out of scale quickly;  both the Abutilon and Coleus were pinched back regularly. 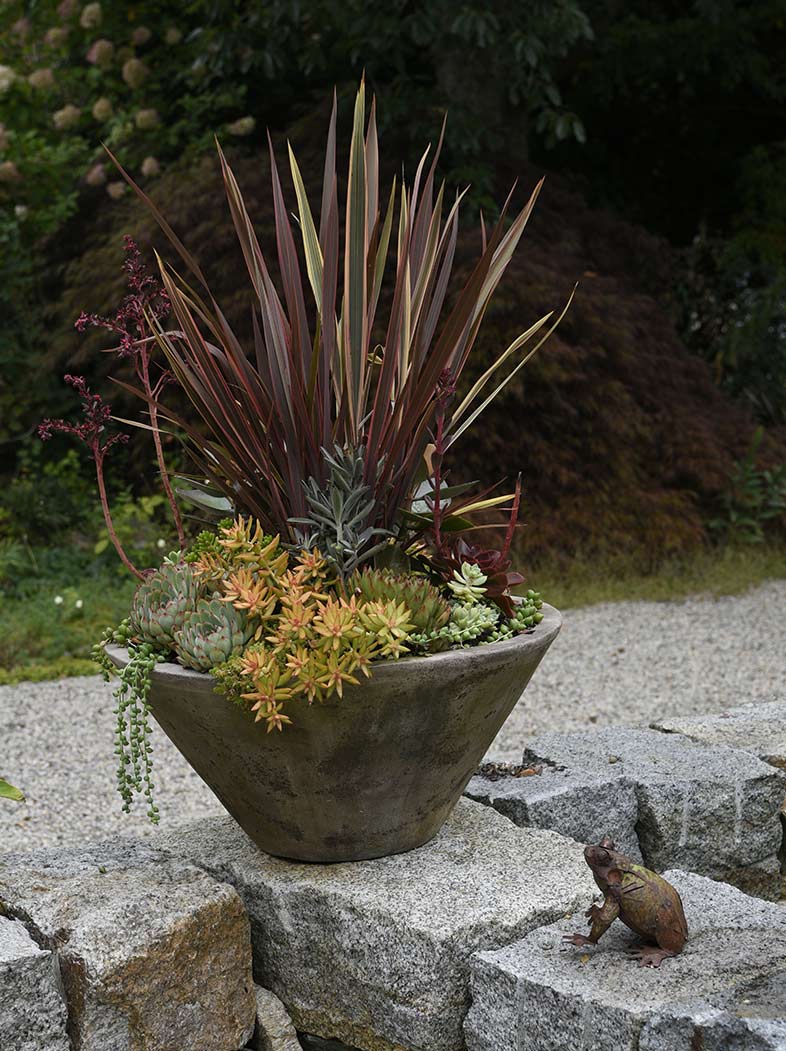 Phormium ‘Evening Glow with Sedum ‘Firestorm’ and various Echeveria and Kalanchoe planted at its base.  Looking just fine in mid October. 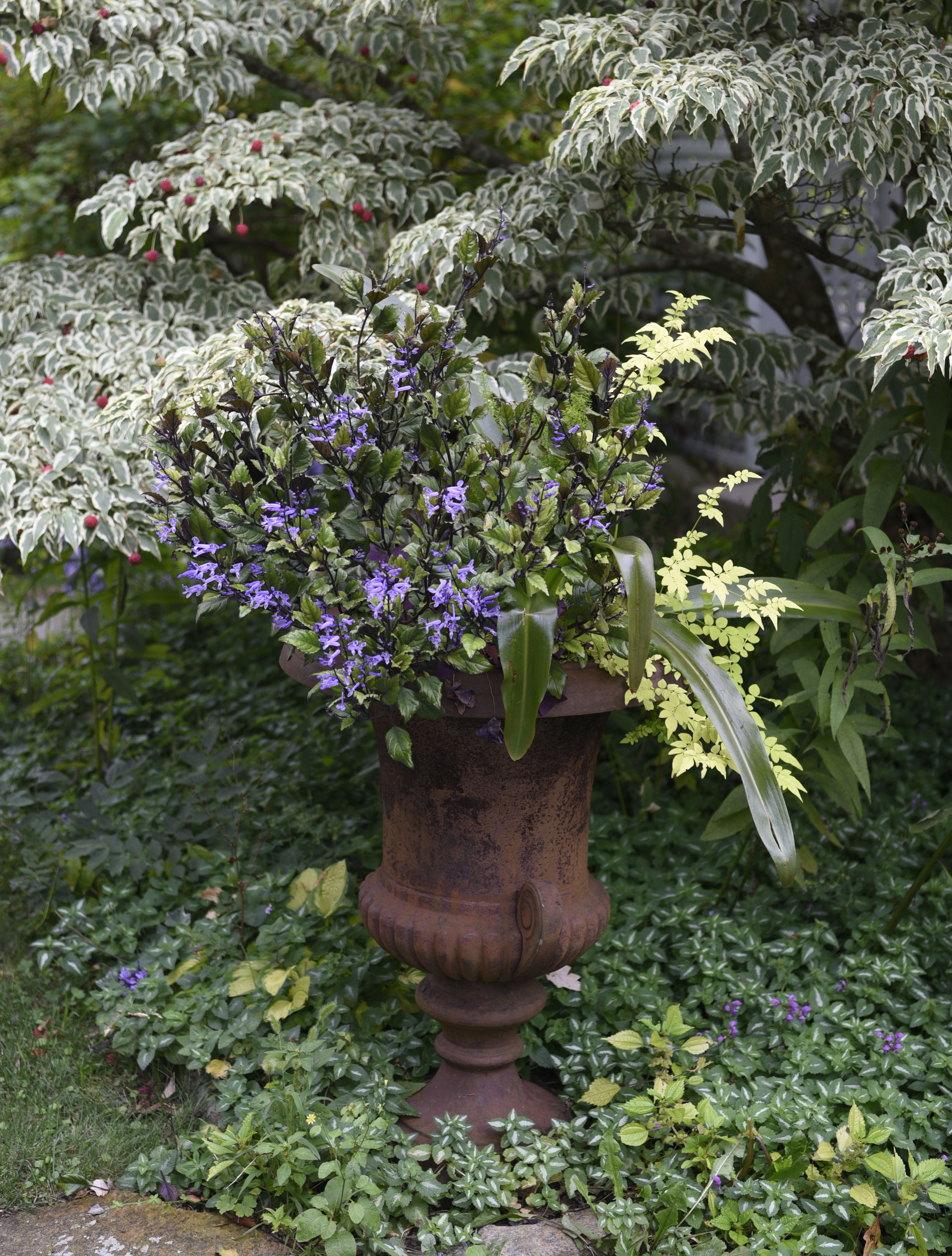 This was NOT the best pairing this year…..the Eucomis never bloomed and we knew the Plectranthus ‘Mona Lavender ‘ would bloom late, but it proved rather lackluster when it finally did. We used last year’s stock plant and it never kicked in the way a fresher, young plant does. The yellow-leaved jasmine did its thing well, though. 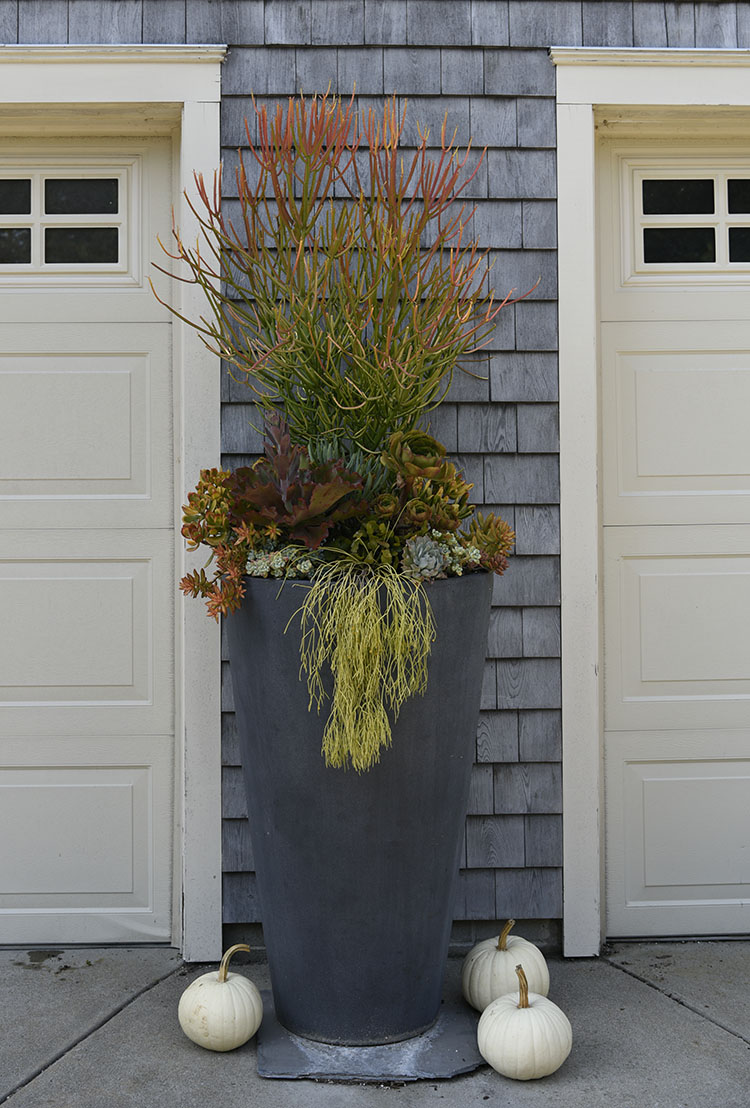 The tall cylinder container with succulents put on a show all summer…the Sticks on Fire did get rather tall and we discussed but could not decide whether to clip it back or not. Love the lacy Rhipsalis that trails in the front! 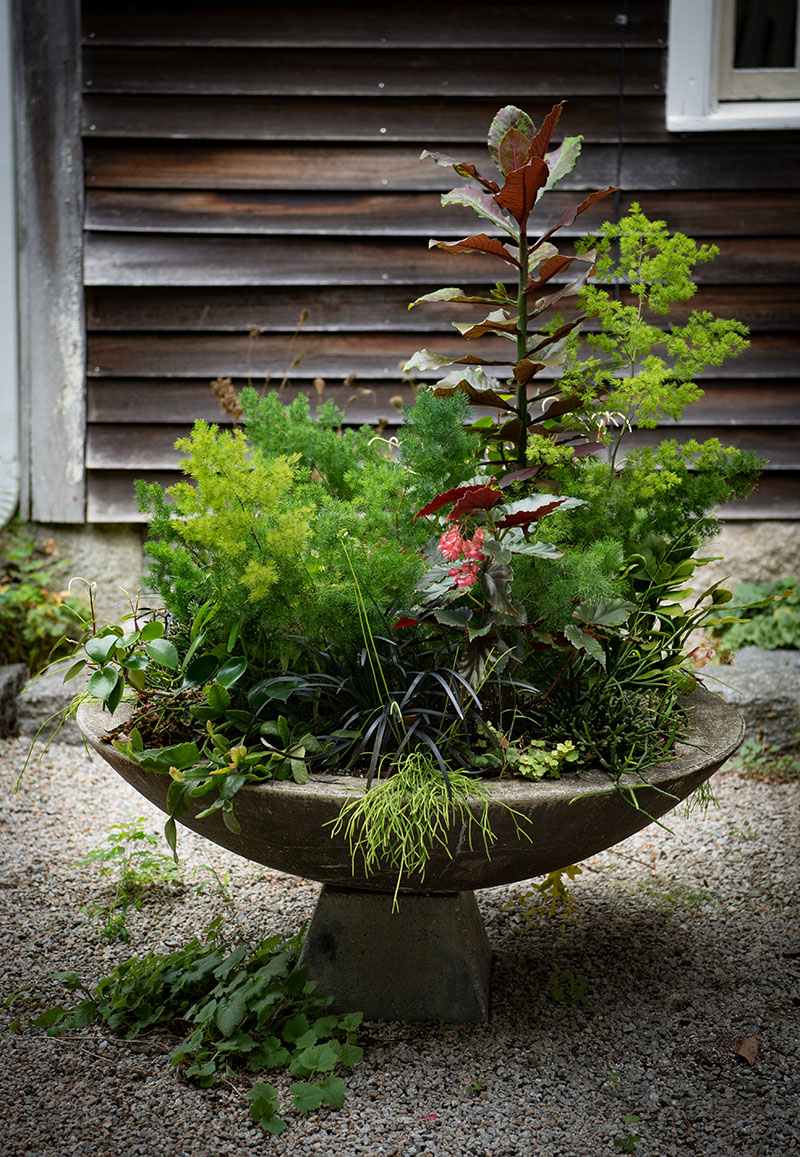 This collection of greenhouse foliage plants in our Zen bowl did well, (except for the Begonia boliviensis that succumbed to a bad case of fungal leaf spot and had to go). Synadenium grantii put on some height . Light conditions: mostly shade except for 2 hours of mid-late day sun. 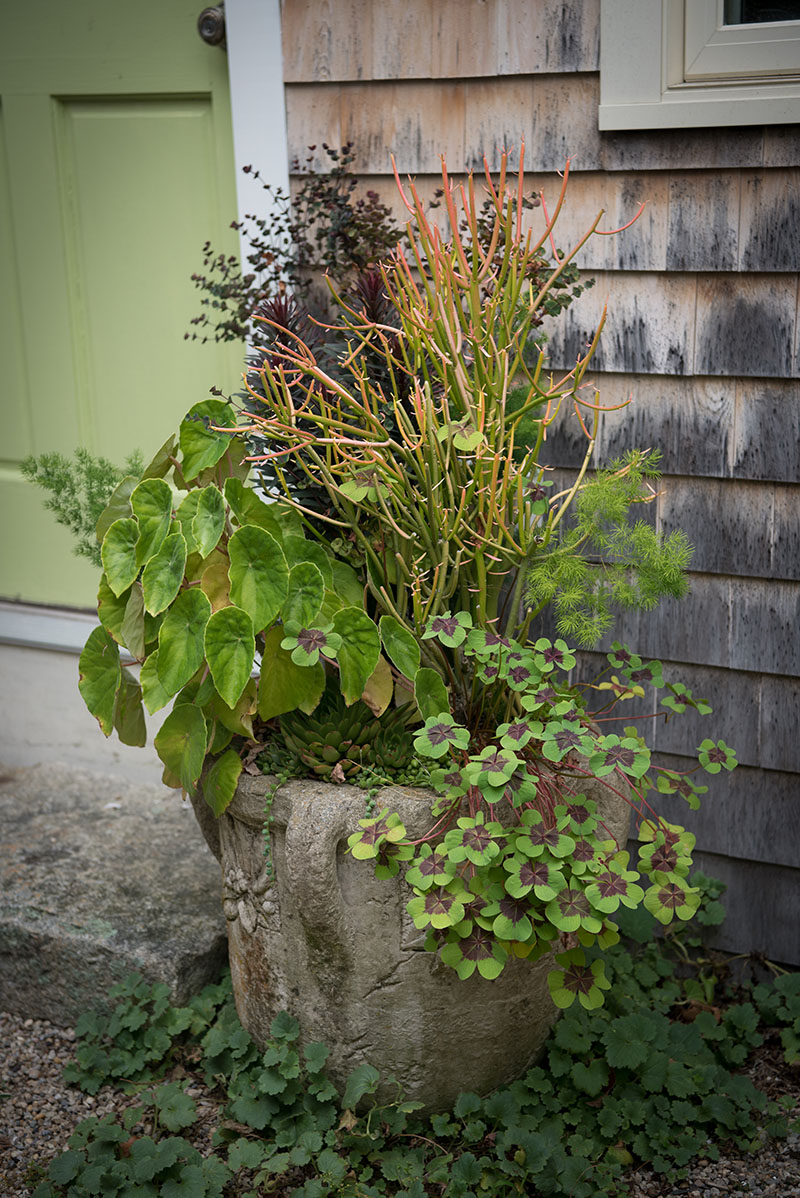 I really liked this Euphorbia turcalli , Begonia kellermanii, Oxalis combination. It is situated where it received 2-3 hours of the midday sun, and then its all shade. There’s also a Euphorbia ‘Blackbird’, a Ming fern and Echeveria tucked in for added from and contrast.

What combinations did you try this year? Which plantings would try again?

7 thoughts on “End of the Season Container Report”