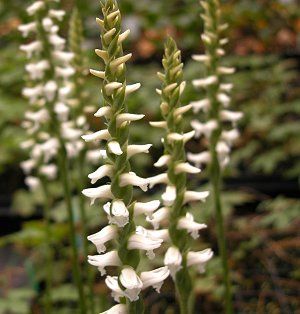 This quite lovely eastern native terrestrial orchid might be quite at home in your garden, especially if you have a spot that stays on the moist side with perhaps 3-4 hours, or more, of sunlight. And at this time of year,  it offers deliciously scented blossoms lovely enough for cutting and using in wedding arrangements.

Spiranthes cernua can be grown in a wide range of hardiness zones (3-8). Native populations can be found in sandy moist lowlands in diverse areas, from Florida north into Quebec and Newfoundland. It forms ground-hugging rosettes of silvery green strap like leaves, and over time, can form good sized colonies in wet soil, even in bogs or swamps. This particular selection was discovered in the Delaware Valley region and named for the southeastern PA town of Chadd?s Ford. In September and October,  Nodding Ladies Tresses, as it is commonly called, bear scented creamy white orchid blossoms arranged in a spiral fashion around sturdy 1-2′ stems. The fragrance is beguilingly reminiscent of jasmine and vanilla. 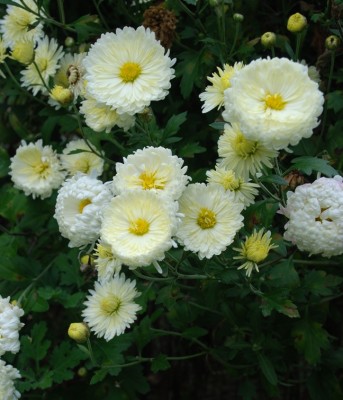 We are often asked, #1, “What is the difference between a perennial mum and the hardy mums sold in pans in the autumn?”

Another question is  “What is the difference between Dendranthema and Chrysanthemum?”

We understand the confusion. If it’s hardy, it must be perennial, right? The answer to #1 is “Yes, but…” And as for the Genus classification, more confusion exists. In 1999, the International Code of Botanical Nomenclature announced we all should be calling the reliably perennial forms (or Korean Mums) Dendranthema.  Now we’ve been told the term Dendranthema is being axed, and we need to classify all mums under Chrysanthemum.

The mums sold in the fall, offered in kaleidoscopic colors, are hybrids of Korean, Chinese and Japanese Chrysanthemums. It is believed that the forms that survive in the coldest zones, 4 and 5, are of the Korean lineage (formerly Chrysanthemum indicum).  What we’ve also learned is that many of the “pan mums” could actually winter over in zones 5 and 6, but fail to do so, because they are planted so late in the season (Nov., Dec.) when we empty our containers. Their shallow root systems get desiccated or exposed to deep freezes and excess winter saturation. To be successful, you should plant your mums by early fall, and/or mulch heavily for root protection.

More of what you need to know: Chrysanthemum set buds when day length shortens, usually in October. If your mums start to bloom in August or early September, it might be due to long periods of overcast weather. Chrysanthemum tend to grow to 3′ in height or more and are quite floppy, unless pinched back. We’ve always followed the rule of cutting mums to the ground on or around the 4th of July to keep them compact, multi branched and floriferous. Each new shoot will bear clusters of blossoms, so the more shoots, the more flowers you will have.  (The pan mums are essentially many rooted cuttings pinched back to ensure a burst of flower power.)

We’ve acquired a small group of perennial Chrysanthemum that winter over well for most of us in zones 5-8. One very special cultivar was given to us by a customer, whose grandmother had kept it growing in her garden back in the 1940’s. We’ve been unable to track down a cultivar name, so we’re offering it as Chrysanthemum from Hannah’s Garden.

P.S. An interesting read on Training Cascading Chrysanthemums can be found on Longwood Garden’s blog 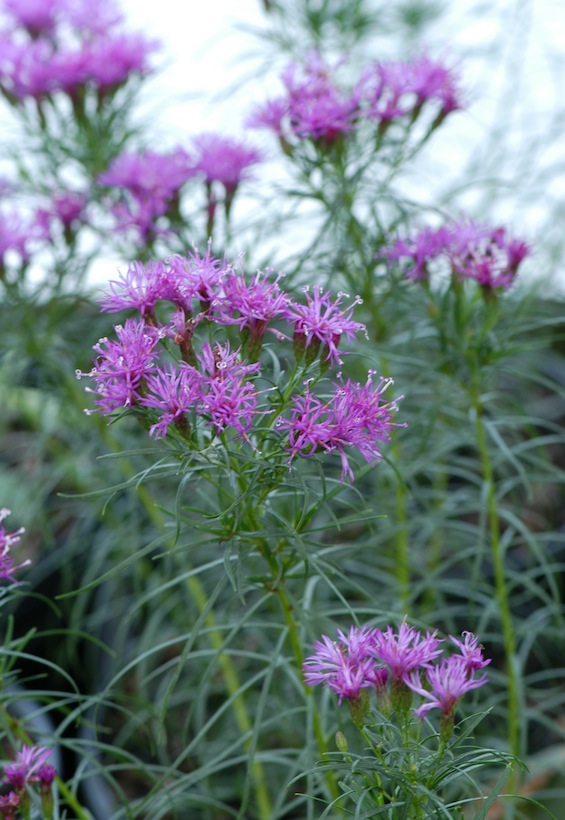 Here’s a plant that you should consider for long season interest. Sturdy 2′ stems are clothed with delicate fine needled foliage, reminiscent of Amsonia hubrictii, gradually forming stands 2-3′ across. Vernonia lettermanii remains attractive all summer, and in early September, clusters of purple aster blossoms top the stems, inviting myriads of monarch butterflies.  Picture this little gem planted with Sedum ‘Maestro’, Anemone ‘Honorine Jobert’  and Calamintha nepetoides and you will no doubt pleased by this end of the summer vignette.

Just about all of us can grow Vernonia lettermannii . Native to the Ozarks and found  in rocky flood plains, this compact species of Ironweed is very tolerant of hot dry locations, yet can withstand brief periods of flooding. This means it is quite adaptable to soil types. It can be grown in gardens ranging from zones 4-9, adding one more plant to cold climate palettes. 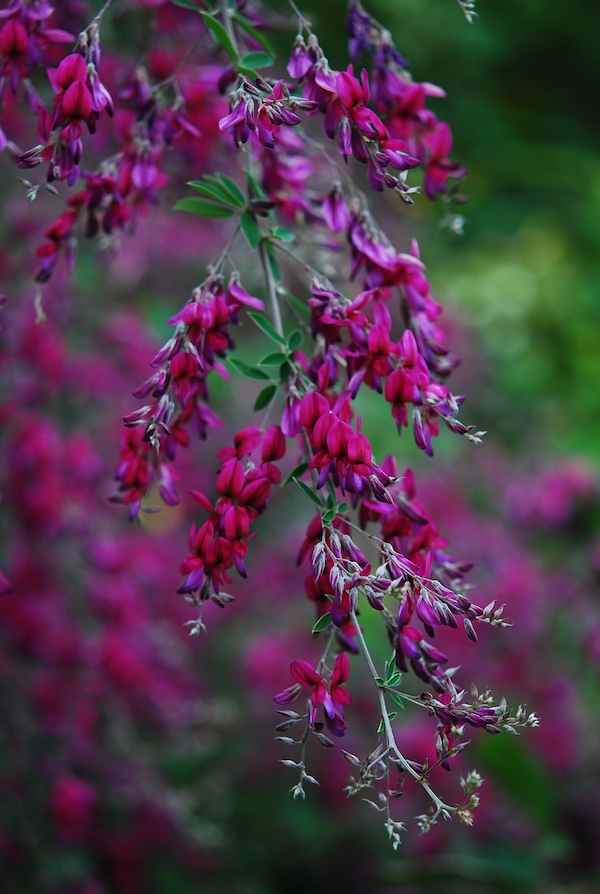 a drop of dew

If you had to choose one plant to fill your late summer garden, you might consider the lovely Japanese Bush Clover, Lespedeza thunbergii ‘Gibraltar’. This selection was discovered by the accomplished plantsman, Bill Frederick, at Gibraltar, one of the duPont family estates in Wilmington, Delaware.  We have to admit ‘Gibraltar’ is a big show-off, quickly growing to 5-6′ tall and in just a few years occupying an 8-10 sq. ft. area quite easily. It loves a sunny spot and is hardy in zones 5-9.

Lespedeza thunbergii ‘Gibraltar’ is in the legume family, and this means it does not require a rich soil, but prefers one that is a lean and well drained. To manage its size and form, you should cut the woody stalks hard to the ground in early spring. This may seem alarming at first, but Bush Clover blooms on new growth and  the full height will be attained by mid summer. A bevy of cascading branches adorned by an abundance of purple pink pea blossoms will add eye catching color from late August through September.

Need a bold, deer resistant plant for the shade garden? Consider Aralia cordata’Sun King‘, tropical in appearance, but a really good option for cold climate gardens.  Hardy in zones 3-8, this choice selection of Spikenard is slow at first, but once established, forms a 3′ x 3′ mound of broad compound brilliant yellow foliage. It retains a golden glow throughout the summer as long as it gets 2-3 hours of sunlight. Sturdy 3-4′ stalks emerge in mid August, each topped with a small fireworks display of white flowers. Dark fruit follow the floral display. When the show is over, ‘Sun King’ will need a rest and will die back with the first hard frost. 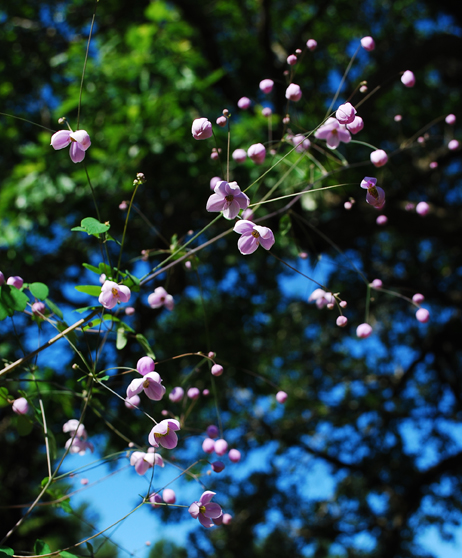 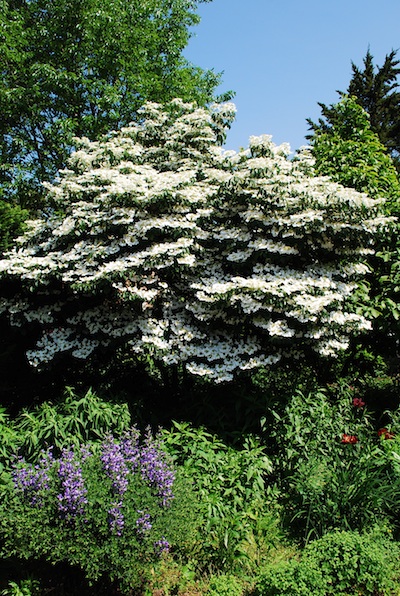 There are many good Viburnum selections on the market, but this cultivar of Double File Viburnum  gets high marks from us. It is laden with white lacecap blossoms in early June, like all the rest, but this particular form continues to produce blossoms on new growth all summer into fall. It is especially striking in autumn, when the white blossoms are set off  by foliage that takes on wine tones.

Early info about the size of this plant reaching only 4-6′ was inaccurate. In our garden our specimen quickly reached 8′ tall, and as much in width. We’ve pruned our ‘Summer Snowflake’ to have a single leader with a more open habit. Plant ‘Summer Snowflake’ in good well drained soil where it will receive 6-8 jours of sun.  Birds love take cover in it’s branches. Deer find them unappealing for the most part. 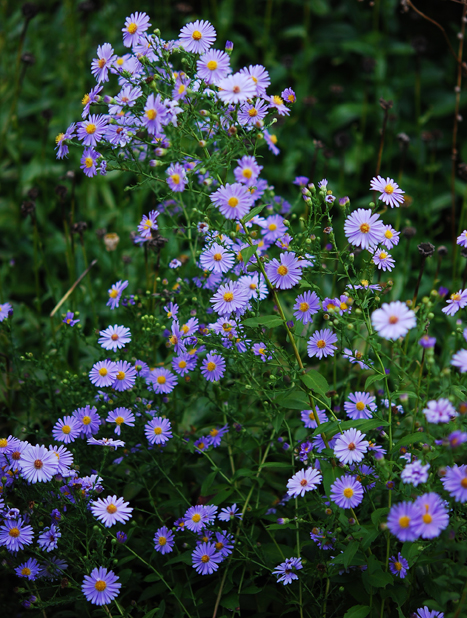 We’re being BC here (botanically correct). Formerly known as Aster laevis ‘Bluebird’ and commonly referred to as Smooth Aster, this native fall bloomer should be in everyone’s garden. It has remarkable attributes. The show begins early-mid September here in New England, when ‘Bluebird’provides a wealth of 1″ blue flowers on branched, quite sturdy 3-4′ stems. ‘Bluebird’ is not cursed with “ugly legs syndrome”  that afflicts New England and New York Asters selections (mildewed and brown foliage). Flowering continues happily into October.

Symphyotrichum laeve ‘Bluebird’ is hardy in zones 4-9, and is not at all fussy about soil, taking even quite dry conditions. Plant in a spot where he will receive at least a half day of sunshine, which is necessary for a colorful display. An attractive combination would match ‘Bluebird’ with tall white Boltonia , Sedum ‘Maestro’ and Ornamental Grasses.  Besides being attractive to bees, ‘Bluebird‘is a draw for migrating Monarchs on their journey south for the winter. Be aware that if you don’t deadhead after flowering you may be the beneficiary of numerous seedlings around your garden.

Some folks complain that they have trouble establishing Anemones. This is not because they are not hardy, for they can easily tough out winters through zone 5, if not 4. However, they do not want to be wet in winter, so be sure you situate them in a well drained soil. They do appreciate even moisture during the growing season, however, so irrigate as necessary, and spread mulch over their roots which will aid in keeping the soil moist. In hot summer areas, grow where some afternoon shade is available. Some people complain it spreads too much!

Another tip: Anemones prefer a neutral or slightly alkaline soil. If you’re unsure of your soil’s alkalinity, test the pH, and add ground limestone in the fall if your soil proves to be acidic. Where they are happy Anemones spread, and can be divided in spring every 3-5 years. Anemones often break dormancy late, so be sure to mark where they have been planted so you do not mistakenly unearth the sleeping roots, thinking you have a big empty hole to fill. 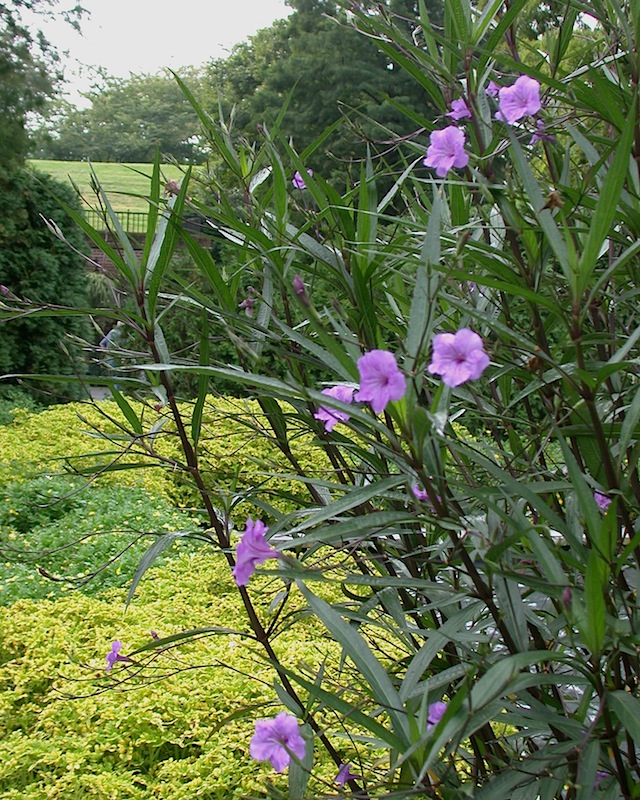 A “temperennial” here in zone 6, Tall Mexican Petunia won’t winter over outdoors for us, but it certainly will in zones 8-10. Still, we always make room for it in our gardens and also use it in container combinations where the tall 3-4′ purple stalks are clothed with narrow dark green purple tinted foliage. The continuous display of violet blue funnel shaped flowers extend on short stems from the leaf axils, and attract bees, butterflies and hummingbirds.

Ruellia ‘Purple Showers’ does enjoy evenly moist soil, and will even grow well along a pond?s edge or in low standing water, a situation that can be challenging. This does not mean it won?t grow in average soil conditions, for it will, but it does not want to fry.  Southern nursery catalogs list Ruellia as an evergreen shrub. We suspect Ruellia may become territorial in warm climates, and should be planted where its vigor is an asset.