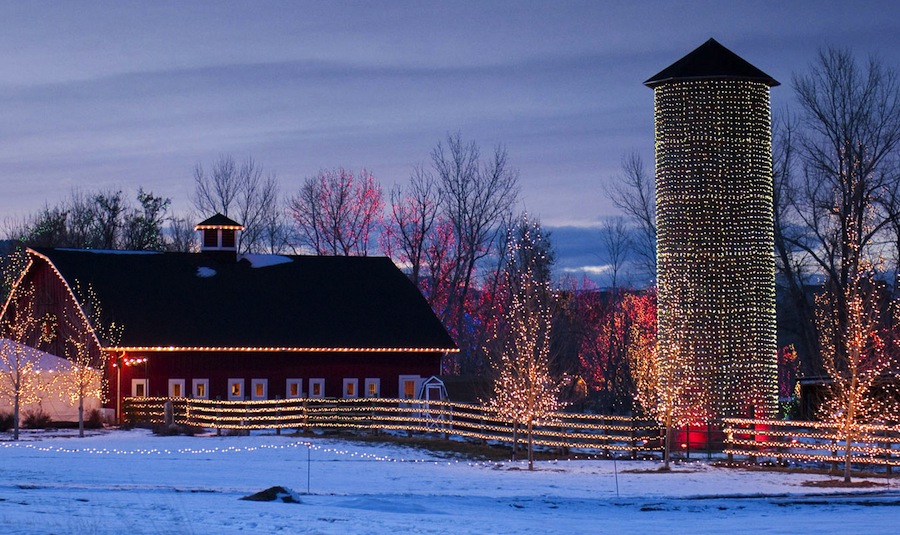 We always think of the first day of a new season as a holiday, one of nature’s holidays, a marking of time which reminds us to take stock of what is important. This year, Dec. 21 marks the Winter Solstice when all living beings in the northern hemisphere experience the fewest hours of daylight. For thousands of years, societies around the earth have celebrated the Solstice by having feasts, making merry with song and drink, and keeping an ever burning fire. Many of our favorite rituals of the Christmas holidays had their origins in Winter Solstice Celebrations.

As gardeners we have reason to celebrate light. The sun is essential for growth, and the winter months restrict us by limiting daylight. Sure, you can are argue that we need this down time to rest, to contemplate. But the sun is our source, and we can easily turn moody and feel depleted until ample light returns. 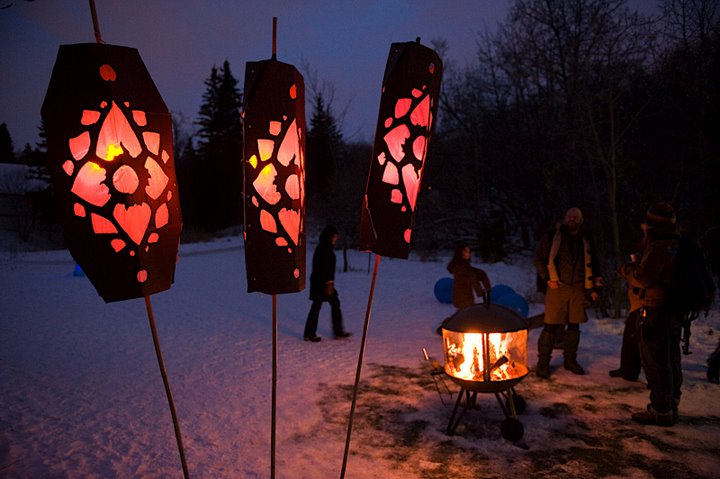 Why give in completely? We came across a website created by a group of Canadian artists, who know a thing about illuminating long winter nights. Their adventurous spirit can provide inspiration for us all. Why not ward off the darkness by bringing light into your garden? You don’t have to be elaborate, and the display doesn’t have to come down the day after New Year’s. Some thoughts: Adorn a garden structure with a strand of lights, illuminate a lovely tree with a ground spotlight. Create a blaze in your fire pit or line a walkway with luminaria. It will make your heart, and the hearts of  those passing by, glow a little too. 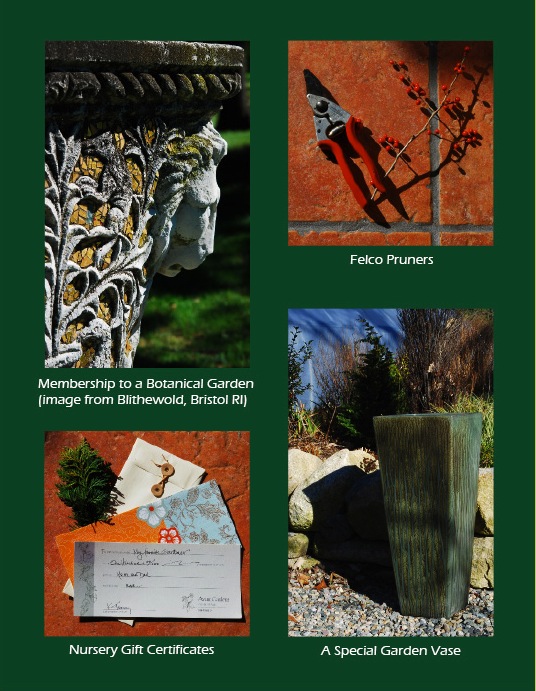 The holidays are approaching, and it’s hard not to feel frantic. One place we try to avoid is the shopping malls. If you have gardeners to select gifts for, that?s easy. Consider a few alternative gifts that will continue to give throughout the year. (hint/hint: you may be the only gardener in the family so “cc:” this webpage to the Secret Santa who pulled your name for the Gift Exchange). Here are a few ideas that offer inspiration and support and that don’t have to cost a lot of money.

Gift Memberships to a Plant Society, such as The North American Rock Garden Society, and The Hardy Plant Society, or a Local Botanical Garden. In our area there is The Arnold  Arboretum, Blithewold, and The New England Wild Flower Society. Memberships in plant societies and botanical gardens provide the recipient with excellent and often free (or at a reduced price) lectures, seed and plant exchanges, opportunities to buy rare plants, periodicals on horticultural topics, and a chance to chat it up with other plant-o-holics. Memberships are a great way  to support these valuable institutions as well.

Quality Garden Tools. Quality does make a difference. These tools last, making them sustainable. Felco Pruners are a must have for every plantsman.  Also, check out Red Pig Garden Tools for hard to find implements. Birdbaths, Handsome Pottery and Containers are all low maintenance focal points that add a sense of place. What about a hammock or garden bench?

Gift Certificates to Favorite Nurseries. Is this too hard a sell? The long cold days of January will soon put us all in a funk, and dreaming of new plants and new gardens is one way to get through the early part of winter. Of course we’d be delighted if plants from Avant Gardens helped your favorite gardener fulfill his or her dreams. 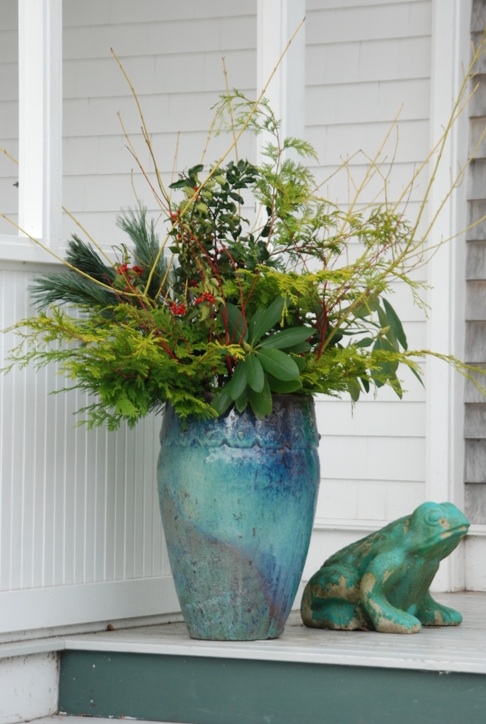 As tempting as Black Friday Shopping is (or isn’t), why not plan an alternative activity on the day after Thankgsiving. Have a thermos with hot cider ready and invite a couple of friends or family members to wander about your garden to gather greens and branches for wreaths and decorating. You’re bound to find a varied selection of evergreens and branches, bare but structural, or decorated with berries and seed pods.

Don’t restrict yourself to the traditional selections…Holly, Boxwood and Pine. You’ll be surprised how well unexpected clippings work. Junipers provide blue-gray foliage and often have attractive blue fruit. Chamaecyparis offer a wonderful array of foliage colors ranging from gold through amber, bronze and dark green, and I love clipping the branches that are adorned with artful cones. Consider twigs with interesting bark or an attractive zig zag habit which will twinkle when coated with morning frosts. Red and gold twig dogwoods offer colorful linear accents, while birch branches can often be found dripping with catkins.

Word of caution: When cutting for arrangements, first be sure you observe how your pruning will effect the shape of the plant. Stand back and view the subject from different angles. You can prune/improve the shape of the shrub and have branches for arranging at the same time.

Display these cut branches in an outdoor container ensemble right away or wait. The smaller cuttings need not go to waste; they can be used to construct a wreath for your door. If you?re not quite ready to decorate, the greens and cut branches can be stored in a cool space until needed. Indoor arrangements created now will become quite brittle and shatter by Christmas, so you may want to wait or plan to do two sets of arrangements, one for now and one for later. 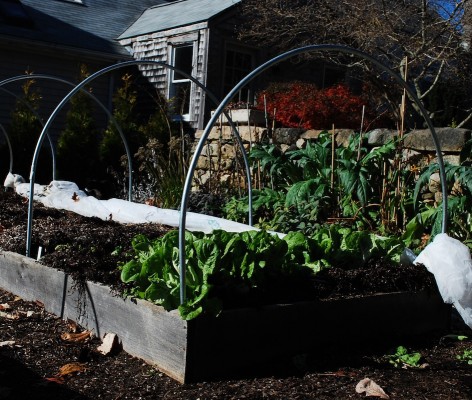 Hoop Frames for Extending the Season

Thanksgiving is a bit early this year, which is good and bad. Good, because we can enjoy this autumnal feast among family and friends without paying heed to retailers’ nagging “there’s only 4 weeks left before Christmas.”  Bad, because, if you’re like us, there are still more tasks and cleanup to do outside, and we gave ourselves a tentative deadline for wrapping up the “putting the garden to bed” chores –Thanksgiving.

Fact is I don’t think there’s ever been a year when we’ve completely “finished” this end of the season chore. There’s always so much to do. A prioritizing list helps us focus on the most important tasks, but we always have so many good intentions. If the weather holds out longer, we’ll take advantage of whatever reasonable days we get to plant the rest of the bulbs or to tackle dividing and transplanting the Siberian Iris that haven’t bloomed well for 3 years.

And what if the garden itself doesn’t want to be “finished”? Our raised vegetable beds are still producing lettuce, kale, carrots, parsnips and beets. We’ve mulched our beds with rinsed and dried seaweed, which protects and insulates the soil for easy digging. To extend the season as long as possible, this spring Chris purchased a hoop bender from Johnny’s Selected Seeds which enables us to make inexpensive supports from galvanized electrical conduit for covering planting beds. The installed hoop frames can be covered with Remay or clear plastic to rebuke the hard frosts. These hoops just might enable us to harvest lettuce into the New Year! 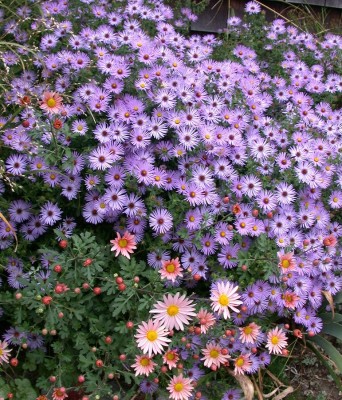 Are you confused? We were. Asters were one of the easy botanical names to remember, since the common name was exactly the same as the Latin name, until maybe a decade ago.  We started to notice that certain wholesale sources were listing many common fall aster species as Symphyotrichum (pronounced sim-fy-oh-TRY-kum). This brought up questions. Will this name take hold with the gardening public? Should we reclassify the plants we were calling Aster? And which asters were considered in the genus Symphyotrichum? Would our customers know to look under this new genus name when seeking the fall blooming asters?

Upon research we discovered that once botanists began comparing the DNA of Eurasian Asters with North American species, they found that the asters native to North America were more closely related to other native genera, especially Boltonia, Solidago and Erigeron. To be brief, the North American Asters included in the Symphyotrichum group are the species: cordifolius, dumosus, laevis, lateriflorum, novae-angliae, novi-belgii oblongifolius. Two New World Asters, divaricatus and macrophyllus are now considered to be Eurybia species.

Some of the Eurasian species have been reclassified into the genera Crinitaria, Galatella and Bellidiastrum, (few of which are commercially available here in the US) while others still remain in the genus Aster, including Aster amellus, ageratoides and tartaricus. The question remains as to what would be the correct nomenclature for Aster hybrids, such as the new selection Aster x ‘Blue Autumn’, recently introduced in the US by European breeders as a cultivar of Aster laevis, incorrectly we might add. We’ll keep you posted when we know for sure.