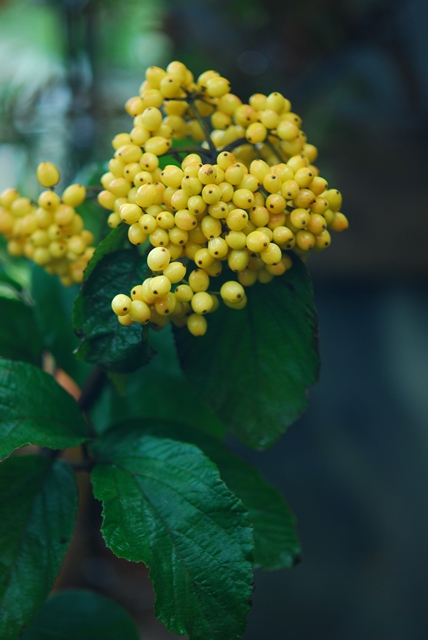 Meet ‘Michael Dodge‘, a golden berried hybrid of Linden Viburnum. He is a cheerful fellow,  who shows off in late spring with a bevy of white lacey flowers and then later develops clusters of showy yellow fruit, which is a sight in our garden right now. The birds are leaving the fruit alone, but that is fine with me because the fruit bearing stems are perfect additions to autumn floral arrangements.

I received a nice note from the plant’s breeder, Mr. Michael Dodge himself.  He informed me that he made a deliberate cross between V. dilatatum and V. d. Xanthocarpum in hopes of getting a larger fruited yellow form in his days working at Wintherthur in Delaware. Mr. Dodge left Winterthur not long after, but was notified that there were some very nice clones from the seedlings he planted. Harold Bruce, the garden curator at that time, named the best yellow fruited clone after him.

Viburnun dilatatum is of Asian ancestry and although it looks perfectly at home in a naturalistic border, it is not as favored by birds and wildlife (plant V. dentatum and other native viburnum species). What it does do is provide dramatic color in the  autumn landscape.  Something you should note is that in order for a good berry set you need another cultivar of V. dilatatum nearby. This may sound confusing, so I should clarify. You should plant a different clone for good cross pollination, and Mr Dodge specifically recommends Viburnum dilatatum ‘Cardinal Candy‘, who will put on a show of its own with bright red fruit.

Viburnum dilatatum ‘Michael Dodge‘ will grow 8-10′ tall and wide. He is not fussy about soil, but will certainly appreciate a fertile loam and grows best in full sun or partial shade. ‘Michael Dodge  is hardy through zone 5. 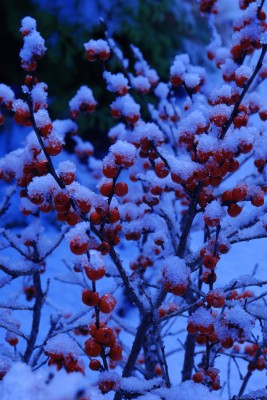 December is the perfect month to enjoy this eyecatching deciduous holly whose brilliant berries, clustered on bare branches, provide splashes of color to the early winter landscape. Commonly called Winterberry, this North American native is found in the wild from Nova Scotia to Florida, usually growing in low lying areas, since it doesn?t mind wet feet. It is nonetheless adaptable to many soil types and will be happy enough in dryer locations. A large number of clones have been selected for their eventual stature, as well as for variation in fruit color and size.

As you probably know, the genus Ilex is dioecious, meaning there are different male and female flowering plants, and they have to tango for fruit set. Take note that there are earlier and later flowering selections of Ilex verticillata and it is a good idea to plant a male counterpart that blooms at the same time as the female clone.  Some of the earlier blooming female clones such as ‘Red Sprite’, ‘Berry Heavy’ and ‘Berry Nice’ should be pollinated with the male clone ‘Jim Dandy’. Use ‘Southern Gentleman?’, a late-blooming male pollinator for ‘Winter Red’, ‘Winter Gold’, ‘Capacon’, ‘Sparkleberry’ and the other later blooming girls.

Ilex verticillata waits until fall to become a star when the berries begin to color, so it is best sited in a spot where it does not have to be commanding all season long. Remember Winterberry does sucker, but this can be useful where you want to create a screen to attract wildlife. A number of years ago, we used it in repetition behind one of our beds that borders a wet area, and the planting now provides us with a bounty of branches for cutting.  Eventual plant size is dependent on which cultivars you select, and they range from 3-4′ to 12′ or more. Plants enjoy sunny or partially shaded exposures, soil that is acid to neutral, and are hardy through zone 4.